“An experience that changes life”, expressed pilgrims from Belo Horizonte about the intensive day 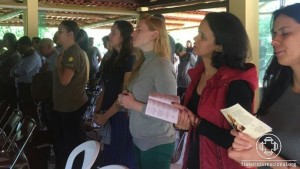 Since early in Sunday morning, November 11, the Pilgrim’s House of the Community-of-Light of Figueira, in a joyful atmosphere of devotion and songs, received the pilgrims that arrived from Belo Horizonte, capital of the Brazilian state of Minas Gerais. A group comprised of travelers who for the first time were making this visit, as well as members of the Network-of-Light and Children of Mary. Whichever their case was, they allowed themselves to tread the path and to have the experience of one day. What some called “a life-changing experience”, was organized by the Marian Center of Figueira, and accompanied by members of the community. The meeting later led the group to tread the route of this intense day.

The path trodden – Wood of Harmony 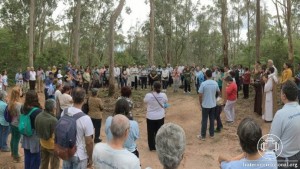 After the reception in the Pilgrim’s House, once they began the walk, they first stopped in the Wood of Harmony, this green space that invites to introspection, where the Oca is located. The Oca is a building inspired in the original South-American Indigenous huts of Amazonia, which, in Figueira, is used for Vigils of Prayer. With these characteristics, this wood turned out to be the best site to begin the route. Forming a circle, they conducted an attunement that anchored a group energy that would soon manifest itself in each step taken, in each place visited, in each heart touched.

Step by step to the Belfry 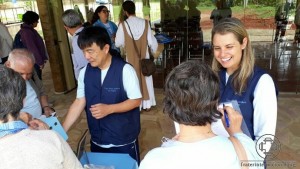 Guided by monastics of Grace Mercy Order, and trying to maintain the energy built in the group attunement, they continued the path in silence, in their rhythm and tempo, each one gradually took their steps to the belfry, a few meters from the Portal of Peace of the Hill of Apparitions of the Marian Center. Once there, breathing this sacred air, they waited for the indications that would organize them in two groups for the other points of visit.

Hermitage of the Glorified Christ – House of Immaculate Peace

Both the Hermitage of the Glorified Christ and the House of Immaculate Peace are spaces of prayer. The pilgrims were able to stay for a prudent time there, which granted them the possibility of consciously proceeding to a moment of internalization.

The Blue Cross, sealing the experience 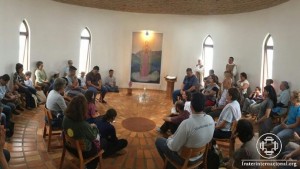 With the impulse received from the prayers, the pilgrims gathered in a single group and began to climb the last stretch of the Hill. Visibly enthusiastic, They managed to arrive and face the Blue Cross, an imposing symbol of “the visible presence of God”. Once there, they found everything ready for the Communion, which would seal the pilgrimage to the sacred points.

Then, they descended the hill, touched by what they had done. When asked about their impression, some summarized that participating in such a day, without knowing what it would bring them, was to allow themselves “a life-changing experience”.

“For a pilgrim, it is a test not to have any novelty that inspires them and makes them walk, for they must even so remain faithful to the goal they have proposed to fulfill” (Excerpt of an article of Trigueirinho, called “The persevering surrender of the pilgrim on the spiritual path”, published in the newspaper O Tempo on August 27, 2017.

Have you ever thought of being a pilgrim?

In order to participate in these pilgrimages, you can get information at: