Residents of the district of Vista Alegre, city of Rio Casca, participated in a group therapy meeting organized by the local Health Secretary, and conducted by the psychologist that is part of the group of missionaries of Fraternidade – International Humanitarian Federation, which is collaborating in Zona da Mata, Minas Gerais, Brazil, where at the beginning of December 2017 there was a great flood. 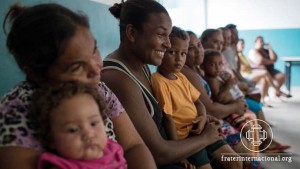 “We opened a space for them to express and share their anguishes and all traumas they underwent. It was about 20 reports altogether, much detailed accounts of the painful experience that each one went through. The tales were evidence that everyone was surprised. Even though they are already used to annual floods, they never had it this big and in such speed. On the other hand, the event awoke in all a very strong feeling of solidarity and of fraternal love, such as experiences of forgiveness between neighbors who didn’t talk for some time and who, in this emergency, did not hesitate to help one another, not to be dragged by the waters”, said Denise Mendes, the focuser of the psychotherapy session.

Denise explained that the stories showed great faith and a detachment from material things. “There were no complaints and everyone thanked God for being alive and because no one died in the locality. Some said that the flood sowed the opportunity to begin it all again, to build more fraternal relations, solidarity and forgiveness”, summarized the professional. 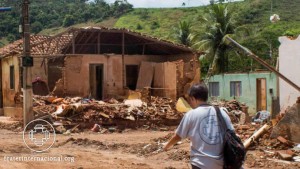 Trails of the flood in district of Vista Alegre

A few days before, one of those affected, João Andre dos Reis, had told the missionaries that the disaster took place in a few minutes. “They were moments of great tension, with desperate cries everywhere, people who climbed the roof or grabbed what they could not to be dragged by the waters. We nearly did not have time to escape. I began to try to raise some things, to save them from the waters, when I looked outside and the river was advancing rapidly in the streets. I ran to the terrace, the water entered and began to rise quickly, so I grabbed a ladder that was nearby and I climbed with my girlfriend to the top of a tree. There we stayed until about 9 p.m. when we were rescued by the canoe of a neighbor who began to render this service, risking his own life. The neighbor improvised a motorboat, putting a motorcycle motor and with this he rescued many people, two at a time, as the boat was very fragile, and the motor went off many times”, said João Andre dos Reis, a resident of Vista Alegre.

In parallel with this meeting, the missionary group, invited by the Health Secretary, participated in a meeting of planning of post-disaster public policies. There they presented suggestions and were invited to coordinate a training workshop for officers of the secretary. 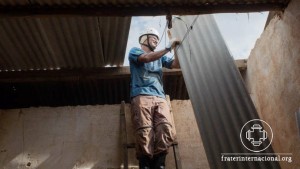 Reconstruction of the house of Dona Izabel

In the meantime, the medical acupuncture, dental and psychotherapeutic services continued at the health center of the city. This time, besides locals, several victims came from the neighboring town of Aguas Ferreas.

In the house of Dona Izabel, an old resident of Vista Alegre, several missionaries continued the tasks of rebuilding of the house. A new wooden structure was put a good part of the roof.

You too can collaborate with this Humanitarian Mission. Learn how by clicking here.