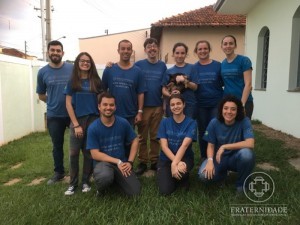 The youth group of São Carlos region participated in a June-event held by a Non-Governmental Organization AMMA, an institution located in the town of Pirassununga, interior of São Paulo, which develops socio-educational activities for about 450 children and adolescents between 5 and 16 Years. Once a year, the entity promotes a meeting that gathers about 500 people per day, for three consecutive days.

The youth group in the town, which already develops fundraising activities for the Youth for Peace Campaign, a movement supported by the Fraternidade – International Humanitarian Federation, saw in this event an opportunity to expand its actions. By suggesting a partnership with the Organization for this meeting, the group was invited to set up a tent, and they chose to participate with vegetarian food. 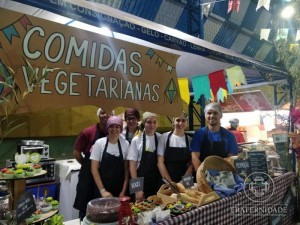 Beforehand, the group mobilized to organize the menu and seek donations of food. Several commercial establishments and local institutions have been triggered. Friends, relatives and acquaintances were invited to support this initiative. Many donations were received, such as, food ingredients, equipment needed for the tent, breads, cakes, snacks, and utensils.

On the 20th, the youngsters were ready for their first experience at an event of that nature, eager to know whether the vegetarian theme would be accepted by an unknown public. Little by little people were approaching and trying the products, attracted also by the cheerful decoration of the tent. However, the big surprise was the soy burger snack, which won the palates and became the favorite in the menu. Even competing with so many snacks and food options at the event, the vegetarian burger won many supporters. 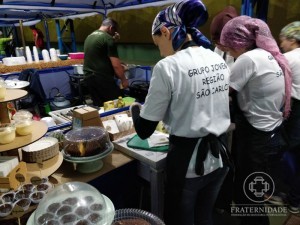 On the third day, the meeting culminated with the first journey of Missionary Youth in the city of Pirassununga, bringing together young people from other cities in the countryside of São Paulo, such as São Carlos, Batatais, Campinas and Matão. At the end, the group raised a significant amount and managed to cover virtually all costs with donations only. There were dozens of people mobilized to accomplish this task, which also had the support of the Light-Network of the entire region of the interior of São Paulo. 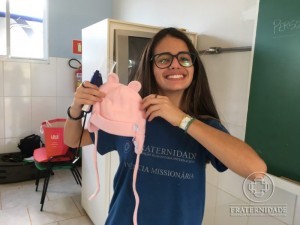 All the resources obtained in the tent were destined for the Youth Festival for Peace, which will be held on July 28th in the city of Salvador, Bahia-Brazil. The donation of the group opens the doors so that young people from other cities can also live an experience of unity and joy.