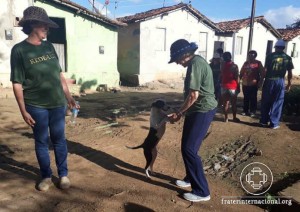 A group of twenty collaborators of the Network-of-Light of North/Northeast of Brazil has carried out the seventh Regional Mission of the Northeast of Brazil. The humanitarian task was conducted in the locality of Palmeiras dos Indios and in three other neighboring villages, in the state of Alagoas. It included therapeutic treatments, cares to the Kingdoms of Nature, special attention to children and distribution of donations. The Mission had the participation of volunteers of the Network-of-Light groups of the states of Alagoas, Bahia, Paraiba, Pernambuco, Rio Grande do Norte and Sergipe. 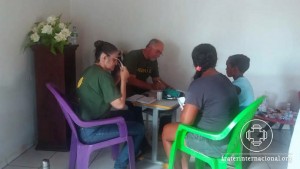 The group began its field activities in the morning of Friday, June 1st, in the Headquarters of Caritas Brazil, in Palmeiras dos Indios. There the group introduced to the volunteers of this organization three techniques of water treatment developed by Northeast experts: the first makes the vital drink potable through the use of mandacaru (cereus jamacaru), a cactus quite common in the region. The second technique attains the objective with seeds of moringa (moringa oleifera). The third technique makes the desalination of water with the application of solar energy, following a process of evaporation and decantation, with the help of two plastic tanks, a black one and a transparent one.

Later, some health professionals that integrated the humanitarian delegation assisted the population of communities in the region. In the meantime, other volunteers conducted recreational activities for the children that came with the patients. 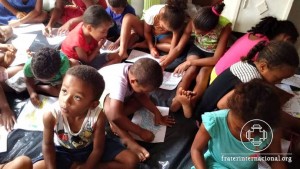 On the following day, the Humanitarian Mission went to the village of Porcao, where the group provided consultations, recreational activities to the children and distributed donations. They also paid home visits and services to the Kingdoms of Nature: there were healings and antiparasitic medicines to dogs and cats; they also talked with the population about the cares they must have with water and trash.

On the third day, the group served in the locality of Tamandua, where they provided health attention, distributed herbal remedies and packages of enriched flour. They also interacted with 80 children by means of talks, story-telling, snacks and hair-cuts. 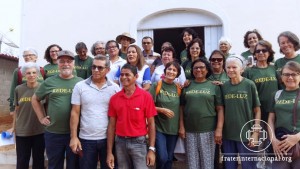 Volunteers of the Network-of-Light and Caritas

In this Humanitarian Mission 184 health services were conducted, with the handing of herbal remedies produced by the Network-of-Light of Aracaju, and antiparasitic medicines were administered to 18 cats and 6 dogs. Also vegetarian food was shared.

The Regional Mission of the Brazilian Northeast is an initiative of Fraternidade – International Humanitarian Federation. It began in November 2014, with the participation of missionaries of the matrix group and volunteers of the region. Since then, the Network-of-Light of the North and Northeast of Brazil assumed the task, organizing cyclic activities, with the cooperation of Caritas Brazil.