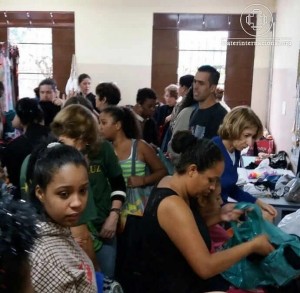 The Network-of-Light group of Contagem, Minas Gerais, Brazil, has been organizing popular fairs of donated articles to raise funds of support for the Campaign for Peace of Association Mary. The last activity, the tenth beneficent fair, was conducted on Saturday, May 20, between 9 and 12 a.m.

“All the fairs are conducted at the Escola Municipal Aurélio Buarque de Holanda (City School), located in a poor community in Belo Horizonte [the capital of the State of Minas Gerais]”, explained Saleth, the coordinator of the group. Contagem is part of the Metropolitan Region of Belo Horizonte, and is 20 km from that city.

In each event, the participants have access at symbolic prices, to several products, fruits of donations, such as clothes, footwear, domestic utensils, decoration objects, toys, among others. “With these activities, we have managed several results: on the one hand, we help many poor people who live in the place, and, on the other hand, we collaborate with the pilgrimages of the Divine Messengers, and we also develop a spirit of unity, of fraternity and of solidarity among the members of the group”, continued Saleth. 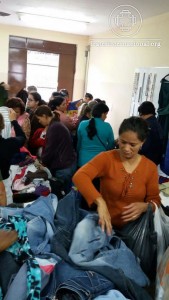 The Network-of-Light group of Contagem began these fairs on July 4,2015, in a response to the request of the Virgin Mary transmitted to the visionary Friar Elías del Sagrado Corazón,  monk of the Grace Mercy Order, on May 21, 2015. On this occasion, the Divine Mother expressed, “Each group, in each country, will be able to exert its creativity and thus find the means to raise the basic funds for the pilgrimages of the Celestial Messengers. Your Mother of Heaven wishes to motivate you to work in cooperation with the Evolutionary Plan and, above all, to experiment love and fraternity among the languages and the sister nations. (Read here the complete message).

Since then, the group has been mobilized to raise donations and to organize the beneficent fairs. Saleth highlighted the spontaneous support they receive from Francisca, a teacher from the school where the fairs take place, both in the dissemination and in the organization and materialization of the meetings.