The Fraternidade founds missionary base of humanitarian help in Greece

The Fraternidade – International Humanitarian Federation, has founded a permanent missionary base in Europe, in Athens, Greece. The objective is to offer humanitarian help to the refugees, especially from the Middle-East and from Africa, who arrive in the Old Continent through the Mediterranean Sea, as well as all who need it. The Greece Mission of Peace is a deepening of the Middle East Mission and the materialization of a request of the Virgin Mary, transmitted  in a message on 29th of February of 2016, through Friar Elías del Sagrado Corazón, a visionary monk of the Grace Mercy Order. 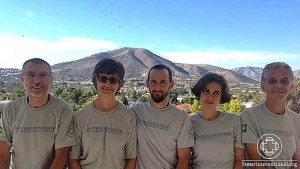 Founding group of the missionary base in Greece

The first group, integrated by five missionaries of the Fraternidade, began services in the new office in September 2016. They moved from the headquarters of the institution, in Carmo da Cachoeira, Minas Gerais, Brazil, on the 21st of September, and were replaced in this month by a second group of four missionaries. In November, the first European collaborator joined the missionary base. 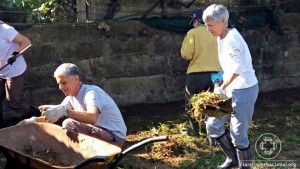 The missionaries that travelled in September disembarked at first in Portugal, where they coordinated the first Missionary Practice in Europe, in the city of Oporto. Permanent collaborators and residents of the Community-of-Light of Fleur-de-Lys (Dornes, Portugal), as well as members of the Monastery of Grace (Fátima, Portugal) and of the Monastery of Christ (Montserrat, Spain). The program included services to the Animal Kingdom, offered with the support of the group of Scouts 229 from Portugal and touched on the theme “How to prepare for moments of emergence”. 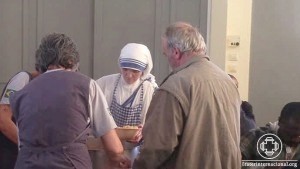 Once in Athens, they got in touch with the Missionaries of Charity of Mother Teresa of Calcutta, with whom they scheduled joint activities. The cooperation takes place twice a week, with the preparation and the distribution of breakfast and lunch to about 70 people, most of them immigrants coming from different countries. The group also began to support the Program of Refugees of Caritas, Greece, with the daily distribution of food to about 300 refugees and the organization of a store of donations, especially of clothes and footwear. He visited two detention centers for illegal immigrants, in Athens and Corinth, and provided humanitarian assistance to drug users, in a city park. 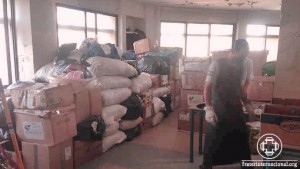 The Brazilian Embassy in Greece is collaborating with the raising of donations that are then given to the refugees. The missionary base has also established contact with the Orthodox Church in Anavissos, to support the preparation and distribution of food to poor people.

The second group of missionaries, who travelled on the 12 of December, will stay in Europe for three months, when they will continue with the tasks of humanitarian help.

Learn here about the details of the Campaign for Greece Mission of Peace, accompany the reports and collaborate with this offering of humanitarian help.