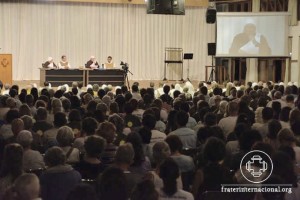 “Armageddon, the cycle of the great renovation” was the central topic of the 60th General Meeting of Figueira, that took place from March 15 and 18, Thursday to Sunday, in the facilities of F2, one of the areas of the Communities-of-Light of Figueira. About 900 people attended it, coming from several cities of Brazil and from other 16 countries. The ‘sharings’ were also broadcast live to all the Communities-of-Light.

In the inaugural evening, the participants were updated about the expansion of the work on the whole planet. Plans of geographic expansion and of improvement of the infrastructure of the Marian Centers, of the Communities-of-Light and of the monasteries of the Grace Mercy Order were shared, as well as the projects of Association Mary, of Mercy Mary TV and of Irdin Editora publishing house. Also shared were the challenges and commitments of the Children of Mary and the whole spiritual work begun 30 years ago by the spiritual philosopher Jose Trigueirinho Netto.

This first evening was conducted by Mother María Shimani de Monserrat, Friar Supremo, Friar Luciano and Mother María del Salvador, all of them of the Grace Mercy Order and members of the Council of Permanent Guidance of the spiritual work. 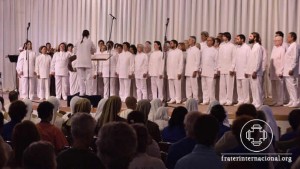 On Friday, the group watched a sharing about the “Subtle Worlds”, specially recorded on vídeo by Jose Trigueirinho, who is in eremitic retreat. On the following days, Friar Luciano and Mother Shimani made reflections about the topic of the Meeting: “Armageddon, the cycle of the great renovation”. The choir of the Communities-of-Light daily presented a spiritual song. 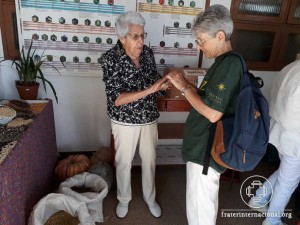 Stand of the seeds

Complementing the conferences, special places were organized, in which the different affiliates of Fraternidade – International Humanitarian Federation were able to Interact with those present at the event.

The bookstore of Irdin Editora made four launches: the book Sacred Kingdoms of Nature, launched with Association Mary; the pen-drive Atributos dos Monastérios (Attributes of the Monasteries); CD’s with ‘sharings’ of Jose Trigueirinho recovered from cassettes from 1988, 1989, 2000 and 2001; the special calendar A flower for each day, with thoughts extracted from books by Trigueirinho.

The titles most sought for were: Sacred Kingdoms of Nature; Supermundane – Vol. I, by Helena Roerich; The Second Coming of Christ – Vol. III, by Paramahansa Yogananda, and Páginas de Amor e Compreensão (Pages of Love and Understanding), by Trigueirinho. 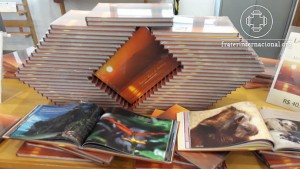 Sacred Kingdoms of Nature collects photographs taken in 33 countries throughout the world and messages transmitted by the Divine Messengers through the visionary monastics of the Grace Mercy Order. According to the synopsis of the book, it aims at raising awareness about the harmonious integration that exists among the Kingdoms and at awakening feelings of affinity, gratitude and reverence for all beings that accompany the brotherhood in their spiritual evolution on the planet.

“With all the information that was given to us, I feel renewed, full of hope, with a lot of inner joy and peace”, shared Gisela Mago, a Venezuelan who resides in Canada. 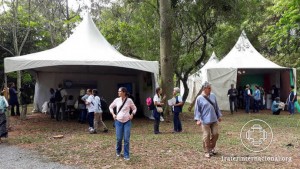 “We are full of gratitude for all the instruction that we received, and for the experience of communitarian life that we lived, which enriched us very much as a family”, commented Zulma Montañez, who came from Colombia with her husband and two sons.

“I feel a great fraternity, a great love that impels me to put myself in the service of God and to continuously ask myself in what I can help the most”, revealed Teresa García, from Mexico.

I felt the impact of the physical absence of Trigueirinho. I feel there is an important change, a new cycle, and I am trying to adapt to this new reality, with all faith and all love”, expressed Cristina Jaramillo, from Ecuador. 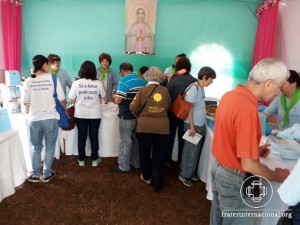 Stand of the Association Mary

“This Meeting allowed us to have a clearer understanding of the vastness and diversity of the work and helped us identify the sector in which each one can contribute, according to their profile”, said Juan, a Chilean collaborator.

“We receive a very great joy from seeing the dimension that the work is gradually acquiring. To know how important is the participation of each one, however small, for the manifestation of this work of love that awakens a greater commitment with the Divine Messengers”, synthesized Germano da Silva Cabral, from Ipatinga, Minas Gerais, Brazil.