Sunday with the Marches for Peace in Brazil and Portugual 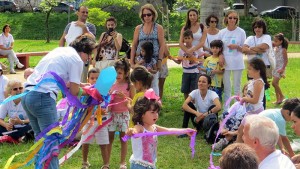 On this last Sunday, December 13, two groups performed a “March for Peace”. One March was in the city of Belo Horizonte, State of Minas Gerais, Brazil, and the other in the city of Matozinhos, District of Porto, Portugal. Altogether, more than 260 people participated in the events. 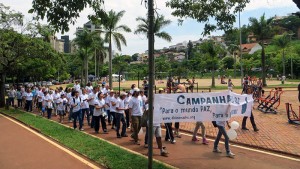 In Belo Horizonte, the Network-of-Light group of the city performed the symbolic March around the Juscelino Kubitschek square. In the same square several activities were undertaken, such as story-telling and a presentation of the choir of the Nucleus-of-Light of Figueira in Belo Horizonte, affiliated to Fraternidade – International Humanitarian Federation. Approximately two hundred people participated in the event, many of who joinined the group while they walked around the area. One detail that stood out was the number of dogs that accompanied their caregivers during the route. 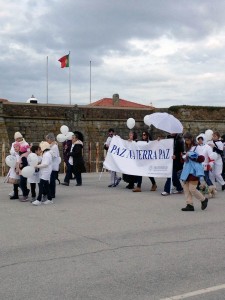 In Portugal, the beginning of the walk was on the Marginal of Matozinhos Avenue and it followed along the shore of the Atlantic Ocean on a route of 2,5 km until Foz. Approximately 60 people, among them men, women and many children, performed the march wearing t-shirts of the Campaign and holding balloons and umbrellas with the symbols of Peace. Members of the Network-of-Light of many cities were present, including Porto, Gaia, Trofa, Maia, Lisbon and Fatima. 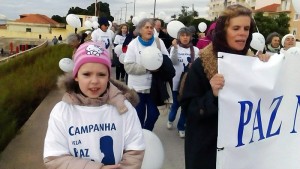 Catarina, 9, who wore the t-shirt of the Campaign and who participated in the whole route, described the March to her grandfather: “it was gorgeous and important. because I helped send Peace to the planet, having the sea by our side, and I learned the name of the Angel of Peace. It was gorgeous, Grandpa”. Many participants also took their dogs during the walk. The name of the Angel of Peace and of Portugal is Artshen. 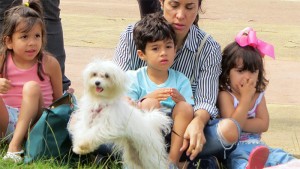 The Marches, performed in many parts of the world, are organized by the Network-of-Light groups of each region and are a part  of the “Campaign for Peace”, launched by the Association Mary and which arose from the message of the Virgin Mary of May 21, 2015 to the visionary monks of the Grace Mercy Order. Both entities are affiliated to the Fraternidade – International Humanitarian Federation. In the message, Mary asks everyones special help for the accomplishment of her plans of peace for the world. The help may come in the form of prayer or of monetary help with the aim that the group of visionary monks and team may come to the countries where Mary needs to be and leave her message.