Humanitarian Roraima Mission in Pacaraima – Many challenges for 2018 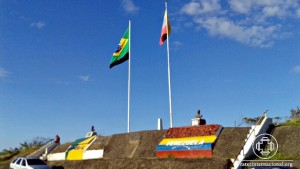 The missionaries of Fraternidade – International Humanitarian Federation, began the morning trying to solve family conflicts and investigating a complaint of theft that took place outside the shelter allegedly committed by Warao Indigenous people. Some witnesses of the theft reported the crime, but the investigation did not conclude because those accused were not in the shelter at that moment.

Health attendance and consultations: many children with dermatological problems and wounds. Bandages and nebulization were done. One child was taken to hospital, where guidance was given and medicine was administered.

Missionaries, Aidamos (Indigenous leaders), the City Hall of Pacaraima and the UNHCR made an agreement stating that no one else will enter the House of Passage due to overcrowding. Nevertheless, when the missionaries arrived in the shelter, 15 people had been recently lodged with the permission of the Aidamos. So, another meeting was called to reconfirm the decisions made before, leaving for another moment the registration of the newly arrived people.

In the afternoon, there was another meeting called by the City Social Assistance Secretary, with the presence of several public authorities: the military police, the federal police, the fire brigade, social assistants, representatives of the Parish of Saint Francis, in short, civil society organized, together with representatives of public institutions. The objective was to share information about the work that will be fulfilled in 2018. Furthermore, an evaluation was made as to the possibilities of action concerning the intense migratory flux in the city of Pacaraima.

Representatives of the Venezuelan city of Santa Elena de Uairén, located in the bordering region, were in the meeting and offered to work in partnership.

Fraternidade reconfirmed its willingness to serve and help in whatever is necessary.

The conclusion is that, in the face of the serious humanitarian crisis, only an intervention of the Federal Government will open possibilities of effective solutions. The Mayor of Pacaraima, before so many difficulties, raised the possibility of decreeing state of public calamity in the town. 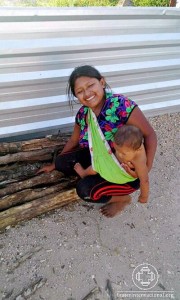 In the morning, habitual health attendance: bandages, nebulization for children with respiratory problems, attention to pregnant women and to the newborn. Some causes of health problems: sanitary precariousness, dust brought by the building of the kitchen and absence of adequate lodging (some children sleep on the floor, for example).

A work is being developed with some women and with youths in the attempt of involving them in artisan and sewing activities, and also in the logistic preparation for the distribution of some items, such as diapers, personal hygiene articles, donations of blankets, etc.

In the afternoon, the manager of the House of Passing, Marcio, of the Roraima Labor and Social Welfare Secretary (Setrabes), talked with the Aidamos and with the community presente in the shelter about the recente decisions made in the meetings. The point about the distribution of foods is very complex, because there is a demand for 350 people, whereas the offer reaches only 200.

In this meeting, everyone was able to express themselves and the majority manifested discontent, as they do not intend to return to Venezuela. Some reported that they sold all their belongings to travel to Brazil, and that their family members are organizing to seek refuge in the Brazilian territory.

If they have to leave the shelter, they confirmed that they will return to the streets and to the bus station. It is important to mention that the Indigenous people in the shelter allow their newly arrived family members to enter. The family bond ends up making it impossible to comply with the decision that no one else can enter. 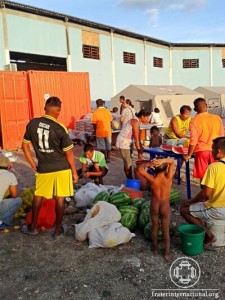 The missionaries participated in a meeting at the house of father Jesus with a delegation of the National Council of Human Rights. Father Jesus is the only priest of the community, and he began the work of reception of the Venezuelan Indigenous immigrants. He offers a breakfast from Monday to Friday. At the beginning it was for 200 people, and now the number is around 500.

The objective of the meeting was to check the general situation of the migratory flux of the Venezuelans: both of the Indigenous and of the non-Indigenous people, who, at the moment, represent the greatest number.

On the same day, the team of missionaries began a support on breakfast with the priest. It was not possible to attend to all the people. 400 people were served and about 200 people did not have breakfast.

In the afternoon, the delegation of the National Council of Human Rights visited the House of Passing. The requests of the Aidamos were listened and will be taken to the competent authorities, according to the coordinator of the delegation.

All kinds of conflicts take place every day, although they are not told daily. The missionaries try to bring peace in the best possible way.

The weekly attendance of the medical team of the City Health Center takes place every Friday afternoon. The people listed by the missionaries are attended, as well as those not listed that need some urgent procedure.

The cases to be taken to hospital or even to Boa Vista are written down for later initiative. The children with dermatological and respiratory problems are the majority of the cases attended. On this day, 17 medical consultations were expected, but 27 were made altogether.

The Mormon Church, partners of the mission both in Pacaraima and in Boa Vista, made the donation of 200 blankets, 47 hammocks and 45 pairs of slippers. A remark: all the children and some youths do not have shoes, which causes problems in the feet.

In spite of the impossibility of lodging in the House, Warao Indigenous people continue to arrive. Those who have some degree of family bond with the ones in the House, manage to enter in the absence of the missionaries. They are not registered, but end up organizing themselves with their family members. This is a complex situation that the team of missionaries, together with its partners, is trying to solve. 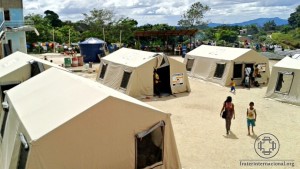 The day began with the counting of the stock of foods and of the material of hygiene and cleaning for distribution.

Some women of the shelter helped organize the distribution of the blankets that had been donated. The missionaries are trying to compose varying groups to participate in the logistics activities.

The structures of public health of the town of Pacaraima (1 hospital and 2 health centers) cannot serve the number of attendance, which are mostly for Venezuelan Indigenous and non Indigenous immigrants.

The discontinuous water supply, and the critical state of the sewage system are two urgent issues of the House of Passing.

Routine health procedures and referral of a newborn baby of 20 days to hospital due to respiratory problems, aggravated by the fact that the baby is a HIV seropositive. He stayed hospitalized for evaluation, with the perspective of being transferred to the capital Boa Vista in the face of his state.

The work of environmental education continued, trying to maintain the space as clean as possible.

There was distribution of trashcans and the formation of teams of cleaning of the toilets and of the Yard together with the Aidamos and their respective Family groups.