After months of group work, the largest greenhouse of the Light-Community of Fraternity, of Aurora, has been restored from its foundation with the help of all its members and collaborators. This structure protects the majority of the vegetables and fruit which support the Community, and thanks to it and to a daily effort of maintenance, self-sustainability is possible. 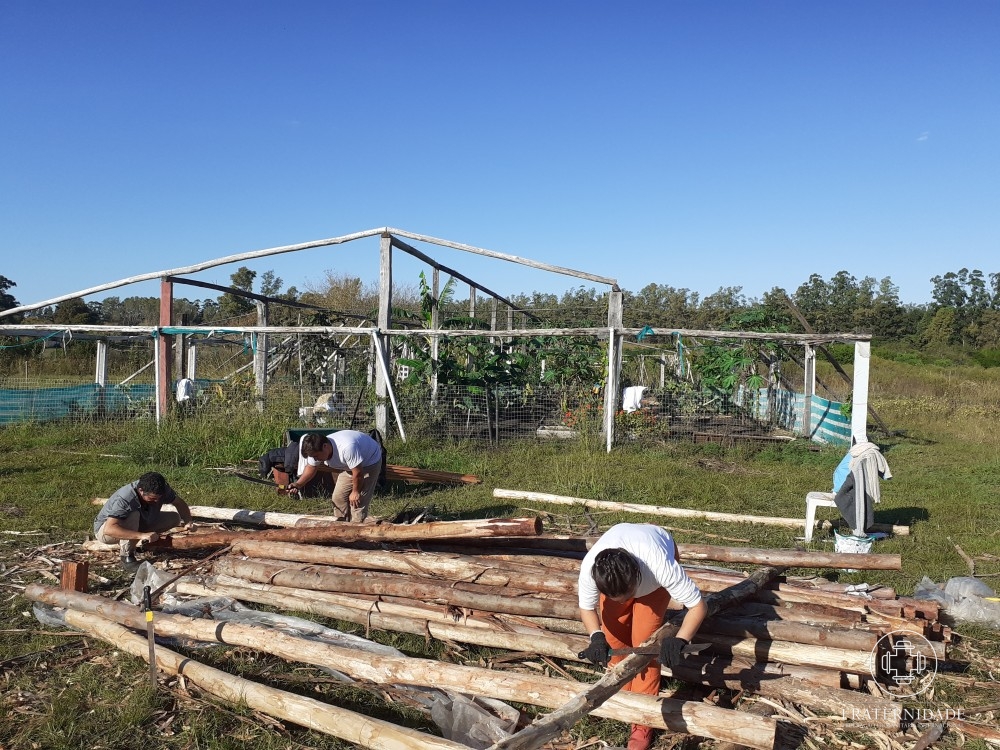 Due to the great changes in the climate and certain unfavorable conditions that occur in the countryside of Uruguay, closed structures that make it possible to control the temperature, humidity and other environmental factors are necessary for the proper development of plants.

The largest greenhouse of the Community, which has been set up in the R2 area for some years now, had the wooden posts placed directly in the ground. With the passing of time, the bottoms of the post began to rot and damage to the plastic on the roof due to the strong winds and sun, showing signs of a need for renovation.

So the decision was made to renew it entirely, starting with placing cement in the holes of the posts and protecting the wood with a material called “hydroasphalt” in order to increase its durability.

The pieces of wood that was used had been donated by a collaborating neighbor, who needed to remove eucalyptus trees from his fields, which were putting his property at risk. Some of the members of the Community helped him in this task, which took several weeks of hard work. 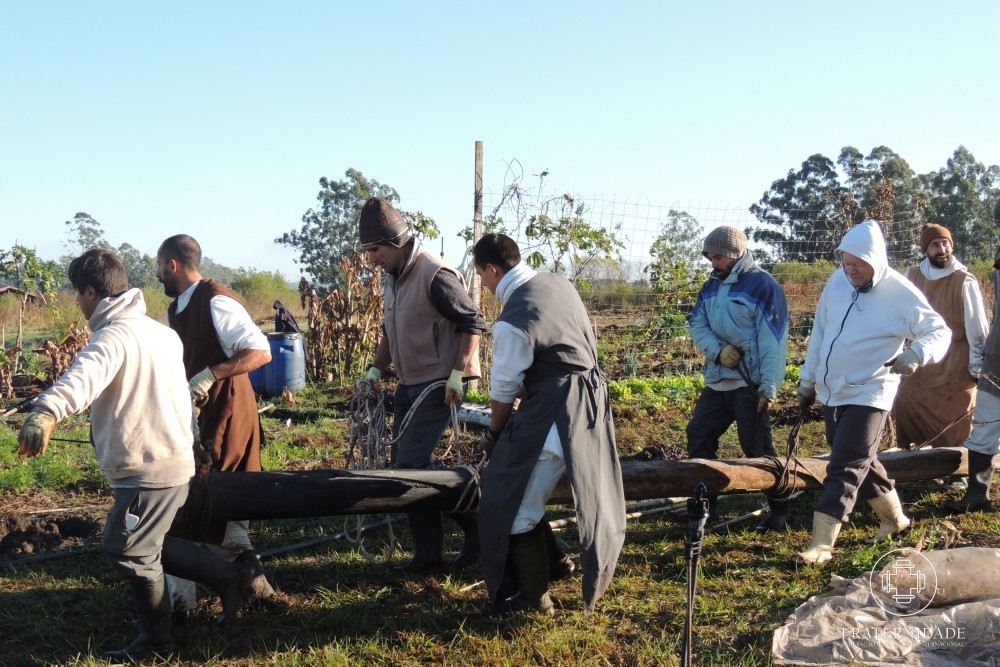 This is how the forty new posts that were needed for the renovation of the greenhouse were acquired. “To have to cut a living tree, something which had been growing for many years, makes you face a difficult situation, but at all times I felt a great reverence for the Plant Kingdom and knew It was offering Itself for our sustenance. Experiencing this process generated a great deal of gratitude for the Kingdoms of Nature in me,” says Friar Akhbar, a member of the planting group, who took on the task of reconstruction with the help of members of the Community and the support of collaborators.

The large pieces of wood were cut to measure, de-barked, and treated in order to begin the foundation of the structure. This task was made possible through the efforts of group work, which are also called “mutirones”, where the members of the Community gather together to carry out tasks in common.

However, several difficulties came up which delayed the task. During the rainy season, the holes of the foundations filled with water and the conditions became unfavorable for continuing. Nevertheless, with the help of the group energy, progress was made little by little. In addition, the posts were heavy, so a considerable effort had to be made in placing them in the holes; a task that was done with ropes.

Finally, after months of weekly work, subject to environmental conditions, the foundation was set up, and due to the large size of the place, it was necessary to hire specialized workers for the placement of the plastic that covers the structure. Friar Akhbar tells us: “I felt that in the face of the projects that need to be carried out in Aurora, this was a very small one; but as a Community, it prepared us inwardly through the group work, through the work among brothers and sisters, to know how to face what will come in the future.” 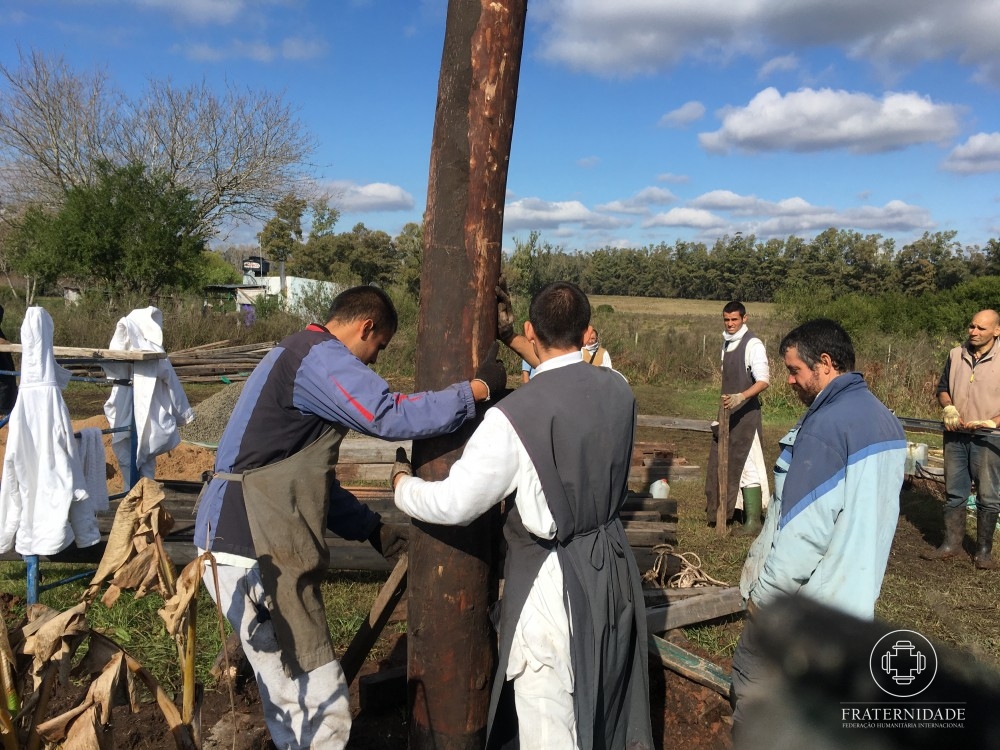 With the main structure finished, the Community is currently dedicated to the installation of the irrigation system and of a fence so that animals can’t enter, as well as the rebuilding of the raised beds, since many of them had been damaged during the process.

Once the conditions within the structure are favorable for planting, tropical trees such as papaya and banana trees will be planted, since this environment allows a microclimate to be generated and provide certain protection for their good growth. Furthermore, during this first stage and taking advantage of the spring season, tomato seeds will be sowed so that they may bear fruit for the summer.

Building a good structure that would protect the livelihood of the Community was a great challenge, that was achieved thanks to the labor of all the servers who worked day after day in fraternity, and reinforced the example that if we are united under the same Purpose it is possible to attain any goal, both material and spiritual.

Friar Akhbar concludes: “We all felt a very special energy; all those who participated, who experienced and contributed to this work from the beginning, came to feel something Greater in the effort of the Community for self-sustainability and the common good.” 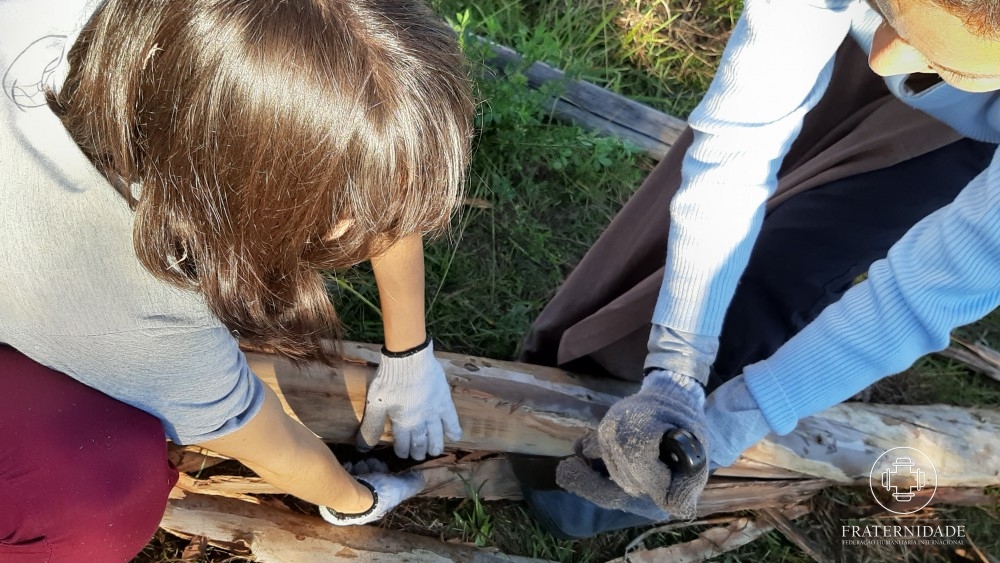 *Clarification: all the people who appear in the photos have lived together in the Community since before the period of the pandemic. The Community is not in contact with the public and does not have COVID cases, so they were without masks. Currently, in spite of not having any cases, the criteria of using masks for greater protection is being implemented.