“Damp your wheat, for the angel of water to enter it. Place it in the air, then, so that the angel of air may embrace it. Leave it from morning to night under the sun, for the angel of the solar light to descend on it. And the blessing of the three will not take long to make the germ of life spring in your wheat. Then, grind your grain and make fine works, as your forebears used to make…”

(From the Essene Gospel of Peace)
⟣ 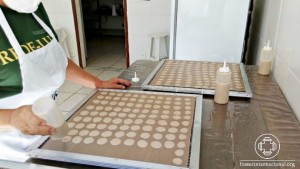 Thus manually and in an artisanal manner are made the hosts in the Nucleus-of-Light of Figueira in Belo Horizonte, capital of the state of Minas Gerais, Brazil. The task was assumed by a group of 12 people of the Network-of-Light of Minas Gerais.

“In one of the meetings of updating, where we announced several tasks to be taken over by the collaborators of Belo Horizonte, the one that had the greatest participation was the production of the Hosts. The group, which has this devotional character, recognized this dimension of the Sacred, which was the elaboration of the Hosts”, said Friar Thomas, a member of the Grace Mercy Order.

The activity takes place during three days of the week, when the members repeat a procedure similar to the production of the Essene bread, described in the “Essene Gospel of Peace”.

According to the Esoteric Glossary, by José Trigueirinho Netto, the Essenes were a people that gathered beings and entities to prepare the etheric aura of the planet to receive in greater potential the Christic essence. Their relationships were regulated by a profound sense of fraternity, and manifested the energy of devotion with a purity hardly equaled by any other group. They lived in Palestine and had affinities with beings in several communities of Syria, of the region called Israel, and of Northern Africa. 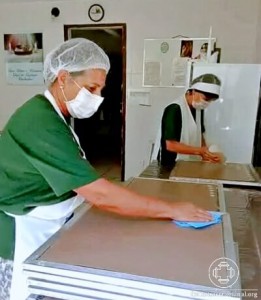 A few years ago, the hosts were made one by one dripping the dough from a spoon. 600 hosts were produced in one day. The production grew, and today 1000 hosts are made a day. The group even came to produce 15 thousand hosts for the Communnity-of-Light of Figueira during one month, and then another 15 thousand for the House of Redemption, in Uruguay in another month.

The process was perfected through an idea of Jane Susie, a member of the group: “while I ate home cookies made of sprouted wheat, I noticed they resembled a host. So I had the idea of using tubes to reproduce the format of hosts. This was also an alternative to replace the hosts made of bread, which had little duration”.

The hosts of the Grace Mercy Order are made only with water and sprouted wheat grains, planted in the Community-of-Light of Figueira. After hydrated for one night, the seeds are washed, drained and left to germinate in the air for the whole day. This process repeats itself for 36 hours until a soft grain is obtained, which is then liquefied in a blender with water, thus resulting in a liquid and homogeneous dough. With the help of tubes, circles are made, arranged on an non-stick surface, which is placed on an electric dehydrator for about four hours. 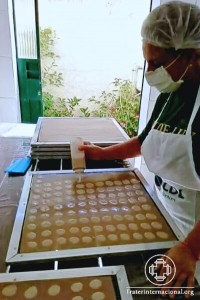 The activity is conducted in silence, humility, gratitude, attention and reverence. Each host is lovingly observed, so that the next ones may be increasingly perfect. “The elaboration of the hosts is a moment of silence and reflection, concentration, patience and a lot of love for the important symbol it is”, said Eliane Amaral, one of the members of the group.

The host are then used in the sacraments of the Monasteries of the Grace Mercy Order and in the whole of the Community-of-Light of Figueira.

“The elaboration of the hosts is a very significant movement. It is part of our most important liturgy, which is the ceremony of the Ecumenical Communion. The hosts represent the material substance that will be impregnated with the Divine codes of Christ, which symbolize the possibility of Healing for the one who will receive them. The host is the base that receives this higher impulse, and which remains available for the elevation of the consciousness of who participates in this ceremony”, explained Friar Thomas.