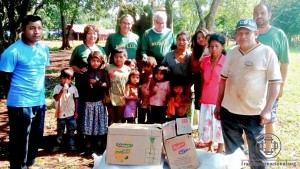 Groups of Paraguay, Brazil, Argentina and Uruguay of the Planetary Network-of-Light conducted the 5th Paraguay Mission from October 27 to 29, 2017, in the Indigenous villages of the region of the cities of Ciudad del Este and Presidente Franco.

On Friday, 27, a preliminary stage of the meeting of service took place. A part of the group went with the Indigenous brothers and sisters to establish where the camping would be set. There was no tree, only red earth. The climate was very rainy, and there was no forecast of interruption of the rain. Only at night, did the sky defuse and on Saturday a radiant sun appeared, which contributed favorably for the continuity of the Mission. 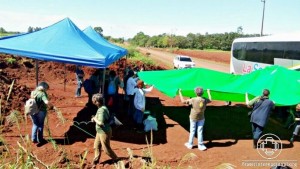 On Saturday, the group did not manage to work inside the village due to the rain of the previous day, which transformed the land in mud. The tents were assembled along the road, and, in spite of the limited physical space, all the tasks foreseen were fulfilled. Dental assistance, haircut and nail-trimming, care of hands, feeding and activities with the children. A place for baths was improvised, because there were no woods for privacy. 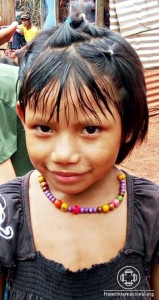 “When serving people, I noticed the importance of our work; we are not just feeding the physical body, but also the soul of each being present there”, told Palmira Bilibio.

The interaction of the missionary group with the children was very special. The making of wristbands with beads turned out to be a success among the children and also the mothers. This kind of artisanship is part of the culture of the Guarani Indigenous people, who work with seeds and several elements extracted from Nature.

Martin Mari, a missionary of Uruguay, told an episode that drew his attention: “A eight-year-old boy wanted to come with us, with the group of the Network-of-Light, he was crying intensely and this touched us deeply”. 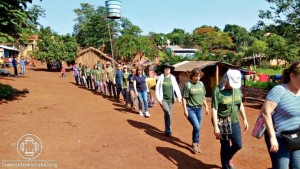 On Sunday, the missionaries went to the Ybu Porã Renda village. On a previous mission, the Fraternidade – International Humanitarian Federation, and the Network-of-Light had donated wood and resources for the building of the village House of Prayer, named “Opy”. The Indigenous community invited the missionaries to participate in the ceremony of inauguration of the sacred place that will be held in December.

Before entering the village, the missionaries opened their arms in a sign of greeting. Maria Leila Posadas commented that it “was a very strong moment, because I felt we had to be empty and with open hearts to receive all the love they had to give us”. 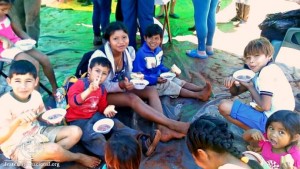 Integration, joy and fraternity built the harmony of the group during the mission. It seemed that the missionaries were “old acquaintances” of one another, and already knew from the beginning what were their functions. Throughout the activities, two members of the team of volunteers conducted the work of prayer.

“To be able to ask for forgiveness. To say the prayer, asking for forgiveness on behalf of humanity, who, as white race decimated this population in the four corners of the world. They, who were here to guard this original purity, to protect the Kingdoms of Nature. To me, this was the most important point, which most touched my heart”, revealed Marcia, from Rio de Janeiro, Brazil. 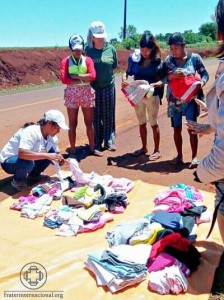 This mission included 32 people of the Planetary Network-of-Light and took more than one ton of food, besides clothes, which were distributed in seven Indigenous communities. At the end of the mission, on Sunday, 29, after the meals, the sky became stormy and the group just had time to collect the material and get on the bus before the rain began. Leila Arenales concludes: “We saw the spark in their eyes with apparently simple things that we were doing, but which were grand to them”.