The Network-of-Light of Salvador, state of Bahia, Brazil, participated in an ecumenical Christmas celebration at the Community of Trindade (Trinity) at the end of last year.

The Community of Trindade is located at the Church of Trindade in Salvador, and welcomes street-dwellers in risk situations who have opted for the experience of communitarian experience as a safe life alternative, free from the vices that previously imprisoned them.

The Community was idealized and founded by Henrique Peregrino at the beginning of the years 2000. Nowadays, he coordinates this work together with two foreign priests and two collaborators who live the vow of poverty. 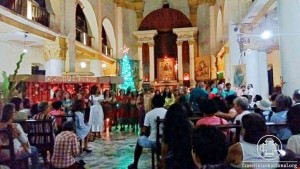 The opening of the event was conducted by the founder, followed by four musical presentations, of which one was of the Network-of-Light group. The church was beautifully decorated with the manger of Bethlehem (the “little house of Jesus”, a lit Christmas tree, many lit candles and several devotional Christian icons. There were more than 100 people, including members of the community and guests from several religious lines in a truly ecumenical fraternization.

In the closing of the event, an ecumenical blessing took place, given by each religious representative, and then there was the sharing of food.

The Network-of-Light of Salvador has kept a partnership with the Community of Trindade for some years. In the last two years it has participated in monthly group services, in which the group assumes, among other tasks, the  preparation of vegetarian food for the whole community.