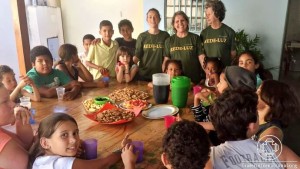 With the proposal of an integration and of a loving strenthening between the members of the groups of service of the Nucleus-of-Light of Figueira in São Paulo and the group of Art Education School of the House of Light on the Hill, a joyful and colorful activity of service was conducted last September 4, in Carmo da Cachoeira, Minas Gerais, Brazil. The task was developed with 42 children, in a building of Unity and Fraternity. Some mothers of students participated as volunteers, giving support to the six Network-of-Light members of Sao Paulo, Santo Andre and Sao Bernardo do Campo. 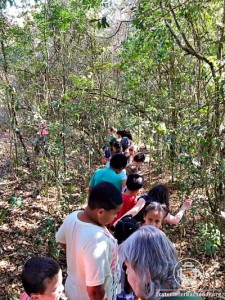 In the morning, the work began with a wheel of fraternization and introduction of the group to 24 children. Then all of them were invited to the workshop of the heart, where the idea was to make a little cushion in the shape of a heart, an activity fully accepted by the children. Motivated by the novelties and with the effort practiced in the workshops of weaving, the children received the first notions of sewing and ended the morning with a snack.

In the afternoon, the activities were conducted with a group of 18 children, who at first formed a wheel of fraternization and introduction. Then all of them went on a walk in the area of the school to the creek, where they made a circular dance and revered the Kingdoms of Nature next to the bamboo tree. Then, they returned to the yard and participated in free activities of spontaneous games, chant and playful game of fitting, ending with a snack. 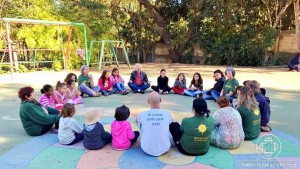 Thus, an example developed there of group life through the co-mingling where the child proactively interacts with the adults. As reports Maria Helena Paiva, a teacher at Arte Educacao School, the volunteers of both groups got integrated in cooperation. “On behalf of the work for the Plan I thank for this meeting of a lot of union and a lot of joy! May it happen other times!” 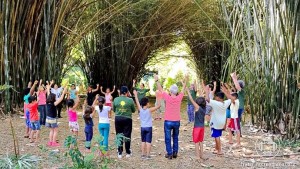 To Claudia Rimini, of the group of Service of the Nucleus-of-Light of Figueira in Sao Paulo, the experience left the following perception: “Above all, we felt the peace as we perceived the confirmation that something greater rules us and that at each moment our trust and faith strengthens. We realized that although we are working each one in their city and we have not shared our principles and way of working, we follow the same line… on the path of donation, of serving with love, surrendered to the greater regency. Our speech and attitudes are similar. We intend to return for new practices that are very fruitful and renew all”. 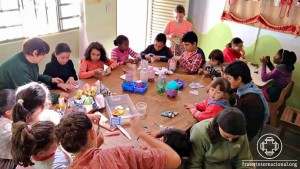 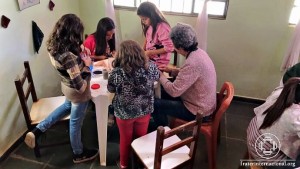