Music for Healing of Humanity returns with live performances

With various innovations in its format and organization will return this next Saturday, December 23, the live performances of Music for Healing and Upliftment of Humanity (MHUH). In this way, the choir of Communities-of-Light and related choirs – a total of 65 people – will meet again, after a six-month recess to offer their voices and hearts as channel of radiating Peace for the entire planet. 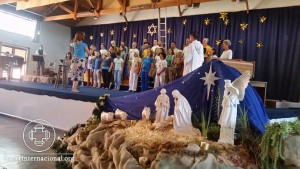 The meeting will happen in the auditorium of F2 area of Community-of-Light of Figueira (Fernao Dias Road, from Sao Paulo, Km 716,5, Carmo da Cachoeira, Minas Gerais, Brazil). The event will start at 8.00 p.m. (Brasilia time) and it will be transmitted live by Misericordia Maria TV.

For this meeting a special edition was prepared with the purpose of celebrating three events: the return of live performances, the second aniversary of Music for Healing and Upliftment of Humanity, and the celebration of Christmas.

In the meeting the following songs will be presented: 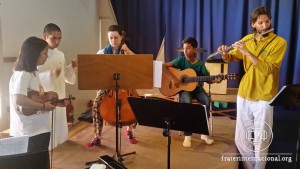 “In these six months of recess, we were able to sow the seed of a future production team. We already have a base group of seven brothers willing to donate themselves selflessly to the manifestation of this event. We are integrating professionals of musical direction,cinema direction, actors, singers and instrumentalists, sound technicians and editors”, said the general coordinator of MHUH, Frei Paulo, monk of Grace Mercy Order.

One of the people who is joining the group is the actress Gabriela de Paula Arruda, who takes the artistic direction. She told that from now on each issue it will tell a story following a script. From this script will be made the orientation for the selection and articulation of all the elements: songs, videoclips, reports from presenters, musical instruments, voices, scenography, lighting, sound, camera movement and other technical aspects. In this meeting the central theme will be: “The birth of Christ within us”. 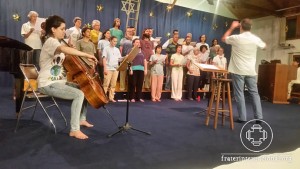 Gabriela added that another novelty will be the instruction videoclips that will be added to the music videoclips and will help shape the story. “For this Christmas edition we will count again with the participation of a chorus of children, who will bring their vibrations of purity, joy and spontaneity”, informed the volunteer from the city of Belo Horizonte, capital of the state of Minas Gerais, Brazil. She noted the presentation was scheduled to last approximately one hour. 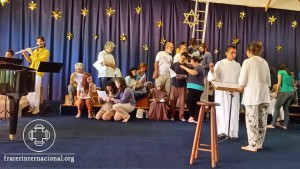 “We are introducting various technical adjustments with the intention of streamlining the presentation of the songs and to give more unity to the show so that the public can better integrate and participate with greater awareness in the construction of the proposal”, observed Lorenzo, one of the technicians of the production.

José Carlos Bago d’Uva came from Portugal. He is regent of the choir of the Community-of-Light Flor de Lys, in Dornes. The artist will direct some of musical pieces that will be offered, representing the Network-of-Light Europe in the construction of this planetary proposal. “We seek to focus on this greater purpose of inner bestwal for a universal task”, said the musician.

Music for Healing and Upliftment of Humanity is an event that is held on the 23rd of each month in the different Communities-of-Light, affiliates to Fraternidade – Federação Humanitária Internacional. The event also is part of the Campaign for Peace of the Mary Association. The task is supported with donations and the effort of volunteers. For more information or to collaborate, click here.

Read the last messages of Virgem Mary about the Meeting for Healing and Upliftment of Humanity: