Members of the Community-of-Light of Fraternity and Uruguay Network-of-Light aid victims of flood in Salto, Uruguay 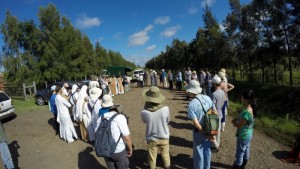 On the last December 25, Christmas, about 70 people from the Community-of-Light of Fraternity, also known as House of Redemption, and from Uruguay Network-of-Light mobilized themselves in an emergency situationto aid the victimsto aid the victims made homeless by the floods in the region of Salto, Uruguay. In this tragedy, more than 2500 people became homeless due to the floods. 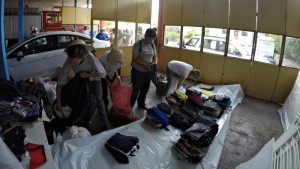 The work started at 8 in the morning, when about 45 people gathered at House of Redemption to organize the action. Ten vehicles were used to transport the group and the material destined to the homeless people: cleaning products, food and clothes. At the entrance of Salto, more people and vehicles joined the group and all followed in the direction of the Fire Brigade in the city, where the Emergency Committee was set up for help of the people in need. 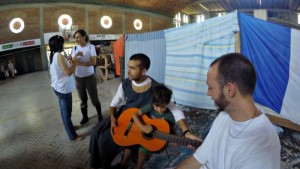 Then the group was mobilized and split to assist the victims in the two places used to receive the homeless people from the city. In the Soccer Club Berlasconi, the group found twenty homeless families and about 25 children. The group quickly organized itself to collaborate in the work of cleaning and harmonization of different sectors of the club. The cleansing of the toilets and the collecting of the trash in and around the club, repairs in showers, sewing system and the roof, where there was an infiltration of water and humidity. Talking with the homeless people and sharing the difficult moment they were passing through was also considered important. Other members of the group stayed with the children, participating in games, learning songs and playing soccer during the whole time. At one point, the children became very happy when they received gifts from another group of assistance. 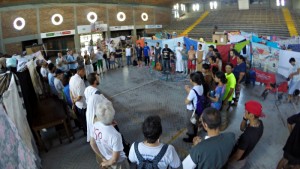 At the end of the task, the whole group gathered and prayers were made together with the homeless, to strengthen their faith and hope in God. “We met families of different social, economic and cultural classes who shared the same emergency situation. Some understood with more serenity the need to remain in Faith and to learn how to overcome the situation, while others felt more desolated”, reports Friar Agustín de Sión, one of the members of the Grace Mercy Order who participated in the task of service together with the homeless. 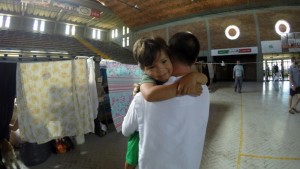