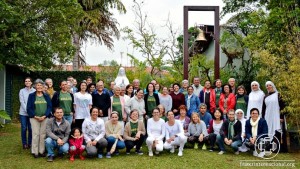 On October 7, 2017, the Nucleus-of-Light of Figueira in Sao Carlos hosted an important regional meeting, part of an itinerant task offered by the Network-of-Light group of the South of Brazil and of a mission of awareness-raising of souls concerning the critical situation of the Kingdoms of Nature.

During the whole Saturday, more than 60 people from several cities, including the youths of local groups, could participate in an intense schedule of instruction, prayer and mantras, focused on the work of deepening of reflection about the impact that unconscious human actions bring to all Kingdoms.

In the first part of the schedule, the video was shown of the lecture “Omnis voraz: a (diet)ethical criticism of ecoanimalist nature”, by Sonia Felipe, a doctor in Moral Philosophy and Political Theory, and profound researcher of animal bioethics. The lecture was recorded during the First Meeting of Love for the Kingdoms, held in Florianópolis in November 2016. It is a revealing study of the impact caused to the Planet by the generalized consumption of animal products, fruit of an updated data compilation about the tremendous carnage that takes place daily in the world and in a specially intense way in Brazil.

The content shown brought exorbitant numbers of a scenery of this great animal holocaust: 80 thousand million lives sacrificed every year, related to other several thousand millions cubic meters of water consumed, blood shed and excretes generated by the animal breeding system and its byproducts.

“It is part of human consciousness to find a certain difficulty in becoming aware of that which is not exposed before their very eyes, or with which they have no daily contact. Likewise, our mind has difficulty dealing with information in very high scale, be it temporal or simply material. Thus, we do not have real consciousness of what the sustenance means for a country, whether environmentally, socially or spiritually, of this system that represents 23% of our GDP and 30 % of our work contracts. In other words, practically one in every  three Brazilians has their job connected to animal exploitation”, explained Sonia Felipe during her lecture.

After the exhibition of the lecture, it was the turn of the documentary “Race in extinction”, which showed the critical situation of the Planet and the process of extinction of several animal species. 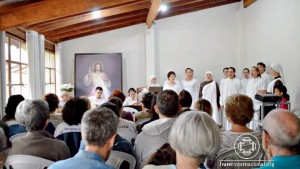 “There is a lot to do to step out of this chain of suffering that the human being has built, even though the process of awareness and change in the human heart is a great mystery. Even not being ignorant about certain processes any longer, there is something to mature before the being turns an inner key that makes them change their attitude. Because this change almost always implies the renunciation to some habit or practice they have established in their life, and this demands a lot from our humanity”, said Mother Maria Cleonice, a member of the Grace Mercy Order and coordinator of the Nucleus-of-Light of Figueira in Sao Carlos.

This Nucleus, besides promoting meetings of youths, sharings and monthly group services, also develops an important task for the Kingdoms of Nature, specially the Animal Kingdom. By means of local service groups, distributed in five cities, more than 1500 animals are attended. The volunteers bathe, shear, provide health cares and the cleaning of the environments where the animals are.

To Mother Maria Cleonice, there is a path for a life of greater harmony and respect close to the Kingdoms of Nature: “Through instruction, prayer and service, we can tread a different path and step by step write something new”.