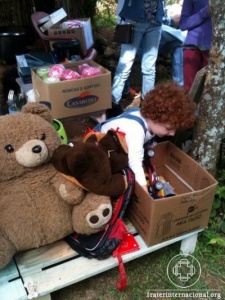 On June 25, 2016, was conducted the 1st Bazaar of Love, in the town of Santo Amaro da Imperatriz, state of Santa Catarina, Brazil. It had the objective of helping the Nucleus-of-Light of Service Crer-Sendo, of the Community-of-Light of the Nova Terra, in Rio de Janeiro.

The installation and organization of the bazar was done by Ana Luize, a dweller of the town. Ana has lived in the Nucleus-of-Light Crer-Sendo and knows the work developed in the Community well. ‘We have promoted the Bazaar of Love here in the South dedicated to the Nucleus Crer-Sendo in gratitude for everything my family lived and learned with the Community-of-Light of the Nova Terra’, said Ana.

To organize the whole event, three months were necessary, when Ana did the campaign of raising, collecting, tidying of the space (her own home) and the dissemination to the town. 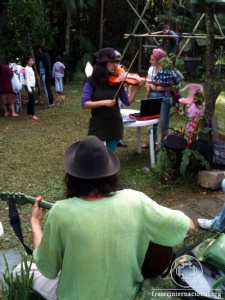 During the meeting about thirty people of different ages and with different needs attended. The symbolic price of each piece was 1 Real. Those who could afford helped with more, and those who could not pay took the piece that needed at that moment.

In the bazar there were clothes and accessories, footwear, furniture, books and toys, all used and that were donated by members of the Network-of-Light of Florianópolis, friends, family members and acquaintances. During the meeting, there was music and a tangerine tree helped refresh those who passed by.

The amount of US$ 400.00 raised by the event will be donated to the Community-of-Light of the Nova Terra. ‘The proposal of the Bazaar of Love continues and each edition will be dedicated to some project or initiative that needs a little impulse’, said Ana. 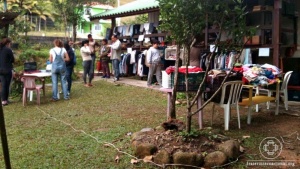