With the objective of offering people the opportunity of deepening their contact with the Kingdoms of Nature, and of collaborating with the creation and the sustenance of native woods, there took place in the Community-of-Light of Figueira the Fifth Meeting of Impulse to Life and to the Plant Kingdom. About 40 people participated in the even, that lasted from February 9 to 13, 2018. 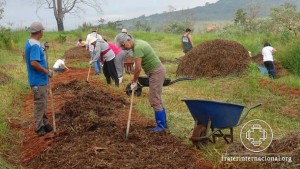 In this occasion, were continued the tasks began in 2016 in the Lands of the Sun, where there is an area with a forest rebuilt. The participants worked in three fronts: organic preparation of the soil, cares of plants in growth and cultivation of new seedlings. As of now, one thousand units of more than thirty varieties of trees have been planted, such as the guapuruvu (Schizolobium parahyba), the sibipiruna (Caesalpinia peltophoroides), the lapacho (Tabebuia), and native fruit trees for birds, such as the uvaia (Eugenia pyriformis), the pitanga (Eugenia uniflora), and the acerola (Malpighia emarginata). 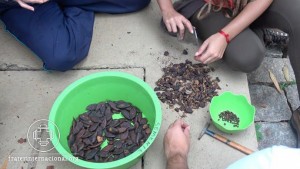 In parallel, was developed the second workshop of preservation and cares to sedes, in which occasion the group worked with the material available in the bank of pure seeds created in the Community-of-Light of Figueira. Information was handed about kinds of seeds, techniques of awakening, forms of cultivation and of accompaniment of germination for future seedlings, among other interesting data. There was also a period of practice for the learned notions. 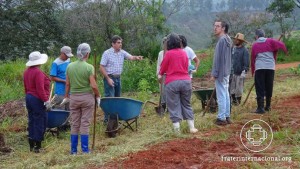 “Our proposal consists in bringing a method of recovery of life in spaces in which it has withdrawn. Here we have all natural conditions for this to be possible. So we try to begin the process, giving the soil the cares it needs in order for it to receive the microorganisms and the Plant Kingdom, offering the seeds the attentions they need and accompanying the process of growth of the plants already cultivated”, described Andre Rivola Cvijak, forest engineer of the of the NGO Foresta Brasil (Brazil Forest), of Rio de Janeiro, and voluntary technician and consultant of the process of reforestation in progress in Figueira. 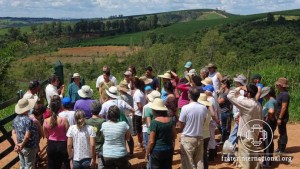 “The trees are examples of fraternity and solidarity. They like to live in community, to help and protect one another before the conditions of nature. As they are very close to one another, they develop much more quickly and have greater possibilities of reproducing and preserving the species. In this consists a wood, with all its biodiversity”, highlighted the professional.

“To participate in these Meetings represents to me a way of asking forgiveness to the Plant Kingdom for so many evils that we cause to it as humanity”, commented Pallas Athenas, a sixteen-year-old youth that lives in Figueira and that participated since the first Meeting with the trees. 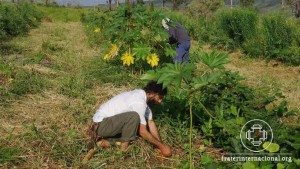 Jonas, who came from the city of Vitoria, Espirito Santo, considered that it is “an opportunity of rediscovery, of perception of so many mysteries about the seeds and the plants and also of living harmoniously with the brothers and sisters”.

“I work at an office in Sao Paulo, and each time I come to Figueira I try to work with the Plant Kingdom. I liked the integration that occurred among the participants, several of them coming for the first time, both to the meeting and to Figueira”, shared Regina Margarete.

These meetings began in November 2015. Since then embryos of woods are being worked in three areas of Figueira: Lands of Brotherhood, F2 and Lands of the Sun.