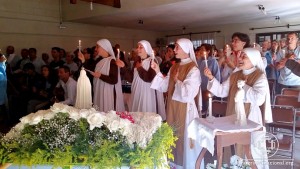 The Nucleus-of-Light of Figueira in São Paulo, Sacred House of Mary – Mother of São Paulo, located in the town of Carapicuíba, metropolitan region of São Paulo, Brazil, held on Saturday, May 13, a special schedule in celebration of the Centenary of the Apparition of the Virgin Mary in Fátima, Portugal.

The opening of the meeting took place in the morning, with a group attunement with the Planetary Center of Lys (see O Novo Código de Lis – The New Code of Lis, published by Irdin Editora. After the opening the film “The Thirteenth Day” was watched, and then a Procession of candles was conducted in the areas of the Nucleus-of-Light, the first in the place, and which ended at 2 p.m. with the Ecumenical Communion. 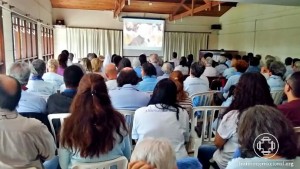 After the procession, the group gathered in the main hall to pray and praise, accompanying the Apparition of the Virgin Mary broadcast via Mercy Mary TV and conducted by the monastics of the Grace Mercy Order.

About 130 people were present. Besides the coordinators of the different sectors of the Nucleus-of-Light, the activities had the participation of pilgrims, representatives of the community of Carapicuíba, collaborators, residents and members of the Network-of-Light of different cities of the state of São Paulo, such as Atibaia, Guarujá, Jundiaí, Santo André, São Bernardo, São Paulo and Sorocaba. “For the first time, we had a meeting on this level, which inspired the Network-of-Light group of the Sacred House, the Choir Sector and the collaborators from the Network-of-Light group of Santo André, of Guarujá and others, and all supervised by the Monastery of the Divine Trinity. The participation of the group was pervaded of a lot of joy! Not an emotional feeling, but a genuine joy of the heart”, said Rachel Navas, a member of the Board of the Nucleus-of-Light of São Paulo. 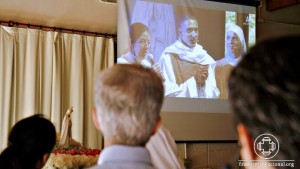 “During the meeting, the chants of praise, the prayers and the songs of the Choirs of the Communities-of-Light transmitted joy and peace in all directions. As As Saint Augustine used to instruct us, ‘to sing is to pray twice’”.

The celebration of the Centenary in the Nucleus-of-Light of Figueira in São Paulo brought a great impulse to the group.

“I felt the brothers and sisters left renewed, and with a vibration of Love pulsated more intensely. With many people I talked to, it seems that the feeling was the same, so it seems that a unit of feeling and of expression was created concerning this”, commented Santo Luizes, the coordinator of the sector of instruction of the Nucleus-of-Light of São Paulo.

“I felt a great joy and openness in the heart of all the brothes and sisters from here. It was a day of communion with the heart of Our Mother, with the heart of Lys and what was most deeply felt was the joy and the devotion of everyone here, especially from the Network-of-Light groups which came, the collaborators and some pilgrims”, said Mother Maria de Belém, a nun of the Grace Mercy Order.