September 21 to 24, Thursday to Sunday 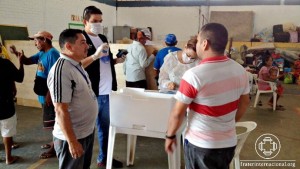 Environmental Inspection in the shelter

On Thursday, 21, a team of the Environmental Vigilance Department (DVA) of the Roraima State Health Secretary  (Sesau/RR) went to the CRI – Center of Reference for the Immigrant, and studied the quality of the water utilized in the area. 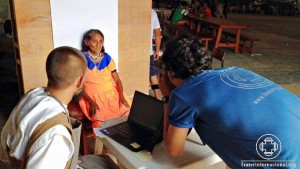 A group composed by members of the United Nations High Commissioner for Refugees (UNHCR) and by missionaries of the Fraternidade – International Humanitarian Federation, began the registry of the Venezuelan immigrants who are in the shelter and who will stay in the place. In the registry were collected several details, such as personal data, weight, malnutrition level and photo. Each immigrant will receive an identification card.

Recreational activities conducted with the children. 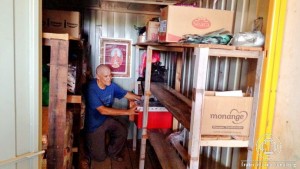 Shelves installed in the container

Shelves were installed in the container rented by the Mormons for the CRI, for better benefit in terms of capacity and storage.

A meeting of members of the UNHCR and of the Fraternidade with the Indigenous women in the shelter was held. The needs were checked for them to conduct their works and the theme was touched upon of their going to the streets with children to beg for alms. 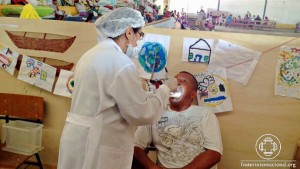 Dentist of the Network-of-Light attending

The training by the UNHCR for missionaries and collaborators of the Fraternidade. Financial managerial themes were touched upon, such as the production of spreadsheets and accountability.

Arrival of foods (greens and fruits) in the shelter, donated by the Mesa Brasil Program (Brazil Table Program) of the Commerce Social Service (Sesc).

A dentist, member of the Network-of-Light of Roraima, conducted services to detect the needs of oral health of the immigrants. 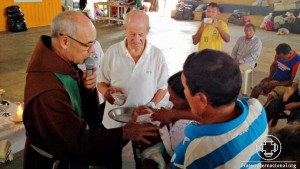 On Friday morning, 22, a Franciscan Friar, together with a Mexican doctor and also a priest of the Order of the Dehonians celebrated a Mass and conducted two baptisms. Then the Mexican priest rendered two health services.

A representative of the Baptist Church visited the CRI and brought a project of social action that will be carried out in December with recreational activities with children, donation of footwear, clothes, foods and hygiene kits. 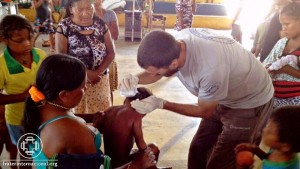 A reporting team of the Bandeirantes Network of Roraima interviewed the monitors of the school of the shelter (Project of the Casa de los Niños – House of the Children) on the 22nd.
On the following day, a reporter and a photographer of the Revista Digital Amazonia Real (digital magazine Real Amazonia) conducted an interview with Clara, a missionary of the Fraternidade.

Urgent assistance of an Venezuelan Indigenous boy who suffered burning from hot water from a pan. The first assistance was made by missionaries of the Fraternidade. 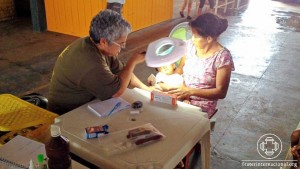 Dermatologist Doctor of the Network-of-Light attending

On Saturday, 23, a young man presented the social project “Reunião de Saberes Poéticos” (Gathering of Potical knowledges), which proposes the articulation of workshops of poetry and illustration for Venezuelan children.

A dermatologist doctor of the Network-of-Light of Roraima rendered assistance service in the CRI.

In the late afternoon, members of the monastery, missionaries, residents and collaborators gathered in the Nucleus-of-Light of Figueira in Roraima to watch the transmission via internet of the event Music for the Healing and Upliftment of Humanity (MHUH). 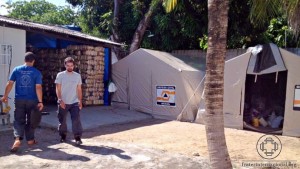 Sunday, 24, was an intense working day, with the implementation of the office in the headquarters of the Fraternidade in Roraima. Two tents lent by the Civil Defense of Roraima were assembled at the back of the headquarters. In one of them will be stored the donations of clothes and shoes, and in the other, personal hygiene items and cleaning products.

The whole stock of donations that had been temporarily in the garage of the House of Saint Joseph was also taken to the headquarters of the Fraternidade in Roraima.

Purchases were made for the maintenance of the houses of the Fraternidade.

In the afternoon, a meeting of the Mission with all the participants in Roraima and a representative of the Fraternidade was held, where the new aspects of the work with the beginning of the partnership with the UNHCR were clarified.

Five tons of rice were donated which had been in the office of the Fraternidade in Roraima to the Association of Venezuelan in Brazil. The donations will be given to the Venezuelan families which are not Indigenous and are not in the shelter. 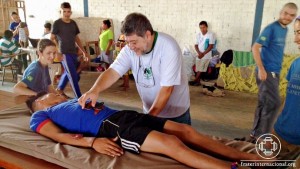 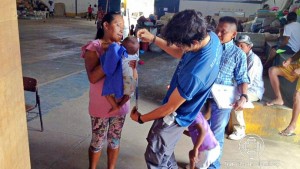 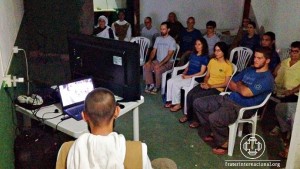 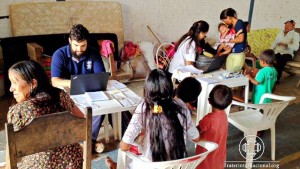 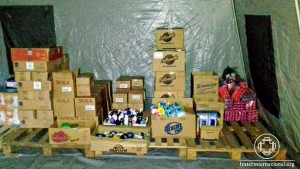 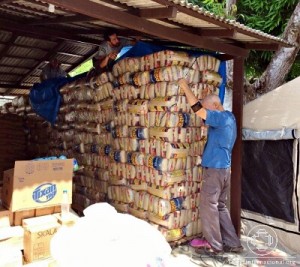