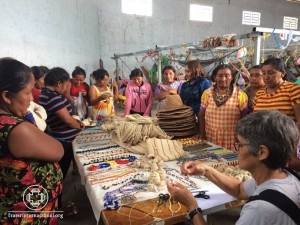 On April 23, began the register of the identification card of the refugees who are staying in the shelter House of Passing, in the town of Pacaraima, Roraima, Brazil. The register is being made by members of the United Nations High Commissioner for Refugees (UNHCR).

On the same day, there occurred the visit of ambassadors of the European Union (of Austria, Germany and the United Kingdom). A table was organized to show the artisanship of the Warao Indigenous people and also a dance was shown to the delegation.

Register of the artisan women

On April 24, the register was made of the 50 artisan women of the House of Passing. Among them, 10 artisans will begin the making of hammocks with the material that was donated. Each hammock is made in approximately 30 days. The Brazilian Army will prepare the space for the weaving.

On April 26, 34 cases of chickenpox were detected in the shelter. On the same day, there was the visit of the doctor of Sesai (Special Secretariat of Indigenous Health). He is making a survey of the history of the diseases in the shelter, so that there may be a more effective control of the diseases. 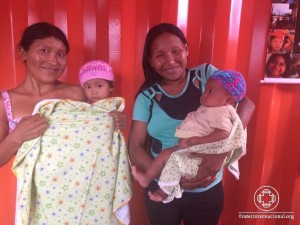 Babies with blankets and bonnets

On April 27, the House of Passing received the visit of three members of UNICEF. Information about the number of children in the shelter were given to the members of the organization. They visited the space of the school and talked with the Warao Indigenous teacher.

On April 28, a distribution was made of blankets and crochet bonnets for new-born babies of the shelter. The donation came from a Mormon Church of Sao Paulo.

On April 30, new containers of the Brazilian Army arrived at the House of Passing (one for lodging of residents of the shelter and two for toilets, one feminine and one masculine).