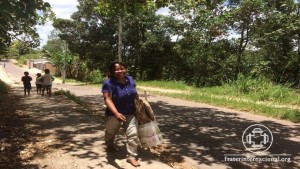 In several days, on the way to the House of Passing, in Pacaraima, Roraima, Brazil, the missionaries of Fraternidade – International Humanitarian Federation (FFHI) help Venezuelan Indigenous immigrants carry timber around the shelter. The families fix their own food and use timber for fire in the process of cooking.

On the 15th, there was much recreation with the children in the House of Passing: volleyball, soccer, jump rope and wheel games. On the 21st, the children asked for their toys, which were hanging in a tent in the external area of the shelter. This is the way the Warao Indigenous people hold the children’s toys so that they do not get lost. 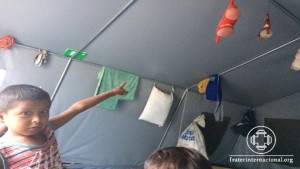 On the 19th, there was a meeting before the distribution of food. The Warao Indigenous People were selling on the street the milk powder tins received as donations. So, it was decided that the delivery of powder milk would be done in plastic bags, with the quantity calculated for each family. It was explicitly asked for those in the shelter not to sell the foods, and, if there were surplus, these food items would be passed to other immigrants.

On the 20th, there happened a visit of representatives of the Brazilian Health Ministry to investigate about cases of measles. The missionaries reported cases of chickenpox and the agents of the Ministry said they would bring more vaccines.