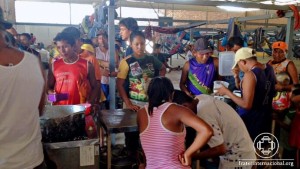 Reception of Indigenous child who was discharged from the Children’s Hospital of Boa Vista, where it had been hospitalized.

Distribution of breakfast and lunch in the shelter.

A team of the Labor and Social Welfare Secretary (Setrabes) that works in a place of reception to needy people – Casa de Passagem (House of Passage), came to visit the Center of Reference for the Immigrant (CRI). The objective was to propose the use of some norms of the House of Passage in the CRI.

“These suggestions will be referred to the Fraternidade and to the United Nations High Commissioner for Refugees (UNHCR) to be studies, as the norms and rules valid for the non-Indigenous people not always are the same for the Indigenous, due to the cultural difference and vulnerability”, explained Claudia, a missionary of the Fraternidade.

The jewelry made by the Indigenous immigrants in the shelter have been selected and cataloged. The pieces will be presented by a missionary of the Fraternidade – International Humanitarian Federation, in a national meeting in Brasília, Federal District, about immigrants and refugees.

Cleaning of container in the gymnasium that will be used to store foods.

Signatures collected from the parents of the children in the shelter, allowing them to go to activities outside the shelter, in the Methodist Church. 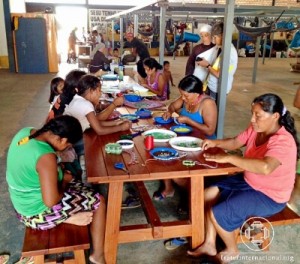 Accompaniment of Warao immigrant, who is suspected of having contracted tuberculosis, to take a test in the laboratory.

Work of artisanship with the Indigenous.

New beginning of activities of the school “Casa de los Niños” (House of the Children).

Warao child who had been hospitalized due to chickenpox, received cares due to the large wounds it still has in its body.

Activities in the office of the Fraternidade in Roraima.

Representatives of the Baptist Church donated kitchen appliances and utensils, and a fan.

A missionary of the Fraternidade began her participation in the 13th National Meeting of the Solidary Network for Migrants and Refugees (RedeMir) held in Brasilia, Federal District of Brazil.

Meeting with the Indigenous leaders to guide the removal, in the morning, of the hammocks installed in the gymnasium.

Pacification conducted between two non-Indigenous Venezuelan immigrants who were quarreling about an accusation of theft. The police was called, who recovered the object stolen by an immigrant who was not registered in the shelter.

Produced and distributed about 50 liters of beet juice with coconut water.

Members of the Baptist Church made another donation to the shelter: a cool box to serve the juices in the kitchen.

Two representatives of the Brazilian Association of Assistence to Families of Children with Cancer and Blood Disorders (Abrace), from Brasilia, visited the shelter and offered to collaborate with the CRI.

Indigenous immigrant beat his wife and was invited to leave the shelter. 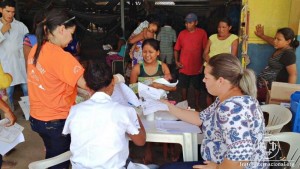 Representatives of Setrabes and of the Social Development Ministry (MDS) were in the CRI to check how the situation was after the installation of the tents and reforms.

One of the containers was prepared to receive a doctor from the Brazilian Army who will give medical assistance.

A team of doctors and nurses of the Special Indigenous Health Secretary (Sesai) conducted attendance.

A new control of entrance of people in the CRI was begun, with the closing of the gate for vehicles and the opening of an exclusive gate for pedestrians. The control of the entrance continues with the shifts of missionaries and immigrants.

“A list was elaborated, especially with the names of the non-Indigenous immigrants living in the shelter, for us to have a control. In this way, we avoid the entrance of other immigrants, as the capacity of the place is above the expected. For the time being we cannot receive more refugees until everything is organized, is more structured and the reforms in the kitchen and in the toilets are finished”, explained Claudia.

In the morning, the missionaries found a lot of filth in the place where meals are served and some bottles of alcoholic drinks scattered in the external area of the shelter.

A doctor from the Brazilian Army, accompanied by two technicians of nursery, attended 22 persons in the container.

A non-Indigenous immigrant pregnant of 8 months felt pains during the dawn and was referred to the maternity by Military Policepersons.

Ropes were used near the place where lunch is served to better organize the queues during the meal.

At night, an Indigenous immigrant who had broken his leg and has iron implanted, was referred to the General Hospital of Roraima for evaluation by the orthopedist. 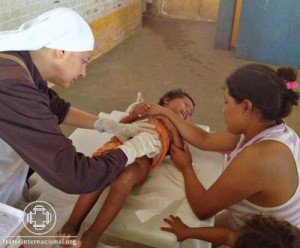 Bandage in a child

During the morning, guidance was imparted to the families in the shelter about the importance of daily brushing the teeth.

“Some children came smiling and showed their teeth and brushed when we were passing”, said Alexandrina, a missionary of the Fraternidade.

Missionaries of the Fraternidade went to the Setrabes to make a registry of a stand in the Artisanship Fair that takes place on Saturdays and Sundays in the Anauá Park, in the city of Boa Vista. With the stand, the Waraos will be able to exhibit their crafts in the Fair.

Children were identified with fever and other symptoms of chickenpox.

Two seropositive Indigenous men were taken to hospital for tests and consultations.

Enrollment files were made for each one of the participants in the artisanship workshop.

Another two improvised and old huts were dismantled, which were being used by the immigrants who wee in the gymnasium.

Reception of a Venezuelan immigrant who was discharged from hospital.

Production of artisan pieces that will be exhibited in an event in November.

Choir rehearsal in the new place of the Nucleus-of-Light of Roraima. 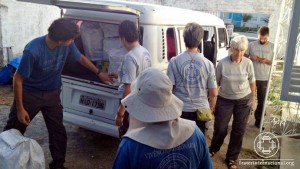 Bandages and nail trimming for children were made.

In the office of the Fraternidade in Roraima, missionaries did the loading and transportation of a great amount of personal hygiene material. All the material was unloaded and distributed in a group service conducted in the CRI.

The material was given according to the number of people of each Warao family. For the non-Indigenous immigrants, individual kits were aseembled.

At night, a general meeting of the Mission was held, with all missionaries in Boa Vista.

During the week, teams of reporters were in the CRI to pick information. On the 16th, Bandeirantes TV made an interview with an Indigenous person in the shelter. On the 18th, it was the turn of Boa Vista TV, which interviewed several immigrants, and of the Newspaper Em Tempo, which made reports about the improvements that have taken place in the CRI. 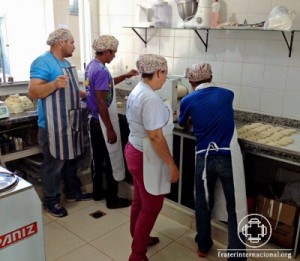 Group at the bakery

Some immigrants were selected and, during all weekdays, participated in the activities in the bakery of the Integrated Center of Attention to the Disabled Person, in the making of bread for the CRI. On the 16th, two immigrants of the Warao ethnic group were taken for the first time to participate in the activity. The use of caps and aprons, hand washing, and how to open and close taps were shown. The taps were different from the ones they knew 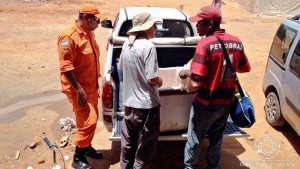 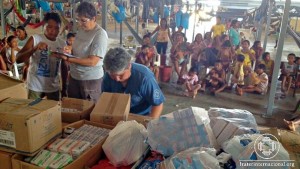 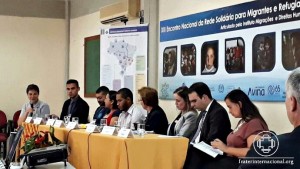 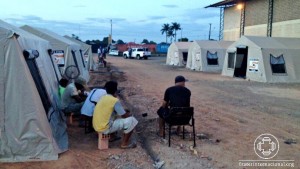 Dusk in the CRI 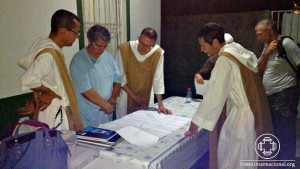 Meeting of the mission 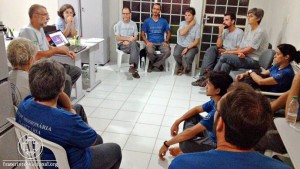 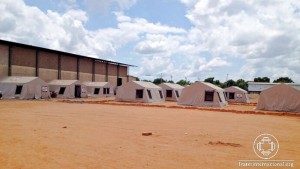 Tents of the non-Indigenous sector 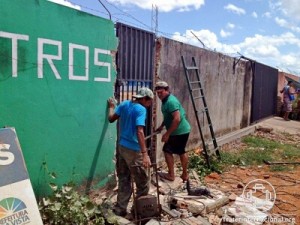 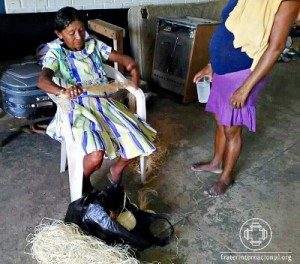