Thursday thru Wednesday, August 24 thru 30 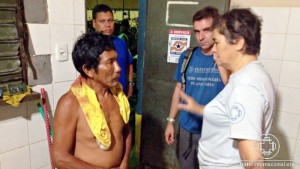 On Thursday, 24, a Family of Indigenous refugees had to leave the CRI – Center of Reference for the Immigrant, due to several problems of behavior.

On Sunday, 27, an Indigenous man was pummeled during a fight in the shelter. On the following day, he and his son were taken to the police station to make a police report. It was decided that those involved in the fight should be  moved away from the shelter.

Members of the Federal Police went to the CRI on Monday, 28, and communicated that they intend to maintain vigilance inside the place. 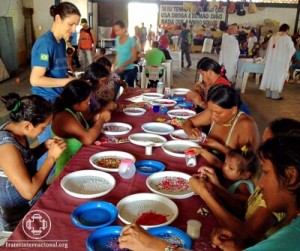 On Friday, 25, clothes and food items were donated to the Association of Venezuelans in Brazil.

During this week, new members arrived to participate in the Roraima Mission. On Friday, 25, four collaborators of the Fraternidade – International Humanitarian Federation arrived in the city of Boa Vista.

On Wednesday, 30, four monastics of the Grace Mercy Order and one resident arrived in the Nucleus-of-Light of Figueira in Roraima. 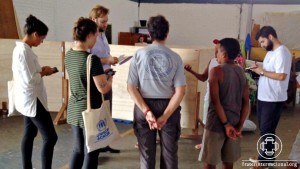 UNHCR team in the shelter

On Friday, 25, a team with four representatives of the United Nations High Commissioner for Refugees (UNHCR), coming from Brasilia, were in the shelter to evaluate the situation of the place and to endorse the new cooperation.

On Tuesday, 29, a new team of the UNHCR, with a specialist on shelters, visited the facilities of the CRI. The specialist will give a training on shelter management to the missionaries of the Fraternidade, members of the Network-of-Light and representatives of the Setrabes (Roraima Secretary of Labor and Social Welfare). 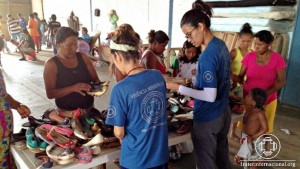 On Saturday, 26, the owner of a shop in the city of Boa Vista offered to buy collars made by the Indigenous people in the artisanship workshops.

The distribution of footwear, diapers and milk was made for the Indigenous women of the shelter. Also distributed were clothes for the children, and cups (donated by the Mormons and by the Médecins Sans Frontières) to all.

On Sunday, 27, the missionaries stayed in the Nucleus-of-Light of Figueira in Roraima.

But at the beginning of the night, the missionaries received the information that there had been a fight in the CRI and went there to check the situation. It was verified that at the moment of the fight the Military Police was not in the place. 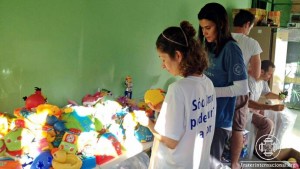 Monday, 28, began with the Mass celebrated by a Mexican missionary doctor with other two priests of the congregation of the Dehonians.

In the afternoon, the missionaries stayed in the House of Saint Joseph, making the selection (by kind and gender) of toys that arrived as donation. 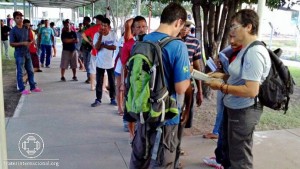 Registering in the municipality

Another group of the missionaries accompanied the register of non-Indigenous Venezuelan refugees. The activity was conducted by the City Hall of Boa Vista at a school that lies opposite the CRI. The register is for the program of “Social Rent”, which will offer assistance to Venezuelan families with funds of the Federal Government.

On Tuesday, 29, the missionaries visited two Indigenous people who are hospitalized at the General Hospital of Roraima. One has a broken leg due to an accident, and the other arrived at the CRI with very debilitated health. Clothes and personal hygiene material were brought to them.

Still in the morning, a Federal Police agent were in the shelter due to a report emitted by the Fraternidade, about cases of drug consumption, prostitution and the attempt at sexual abuse of a child. The agent checked the current situation, and was informed that these things are not happening anymore in the period in which the missionaries are present in the place.

Visit of a missionary volunteer of the Evangelical Church of the Agency Arrows for the Nations, who is instructing the Indigenous women concerning artisanship and sewing.

The owner of a shop brought clothes items to be decorated with the beads made by the Indigenous people.

Registering of new non-Indigenous Venezuelan immigrants, who keep arriving at the shelter every day. 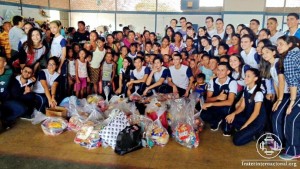 Students of the Roraima Baptist Institute

Students of the Roraima Baptist Institute (IBR) made a campaign and raised donations of clothes and food which were distributed in the CRI.

The missionaries of the Fraternidade participated in a meeting at the Mormon Church, where collaboration with food and fumigation was defined.

Child’s Hospital of the city of Boa Vista informed that a Warao Mother with seven-month baby left the place before receiving hospital discharge. They were not found in the CRI.

Census of the shelter was updated. The total number of Indigenous and non-Indigenous immigrants is 570.

Research for a new book 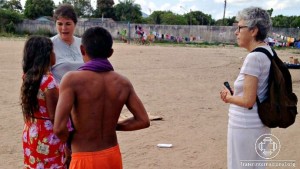 Ana Regina Nogueira, author of books published by Irdin Editora, will stay during one week accompanying the activities of the Roraima Mission and picking information. The author is writing a book about the Missions of the Fraternidade. The first day she accompanied the group was Wednesday, 30. 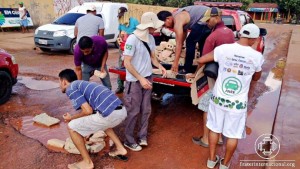 Repairing the street across the CRI

Wednesday, 30, began with the removal of debris that were in the shelter and that later were used to cover some holes that had appeared on the street pavement, in front of the entrance of the CRI.

A member of the City Guardianship of Boa Vista went to the shelter and informed about bad conduct of Venezuelan Indigenous immigrants in the square near the CRI. 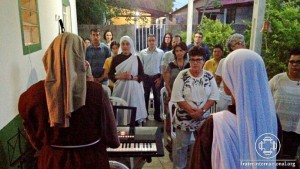 Rehearsal of the choir in the Nucleus-of-Light

An Indigenous person who had been hospitalized with a problem in the leg received discharge. Another immigrant remains at hospital and will undergo a surgery.

At the end of the day, a pregnant Indigenous woman began labor and was taken by the Fire Brigade to the maternity.

At night, missionaries, collaborators, residents of the Nucleus-of-Light of Figueira in Roraima and the newly-arrived group of the Monastery participated in the rehearsal of the choir. 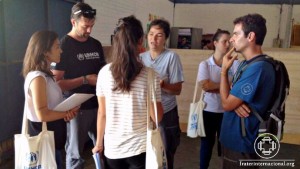 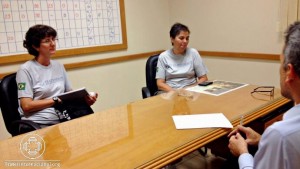 Meeting in the Mormon Church 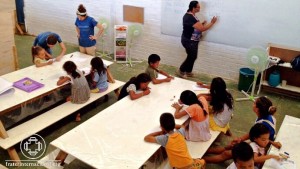 School in the CRI 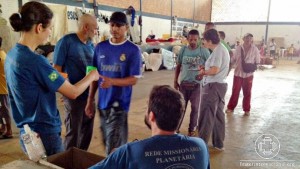 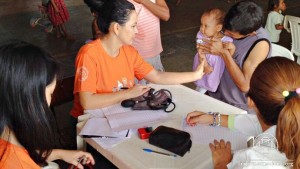 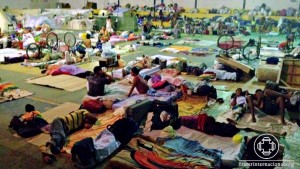