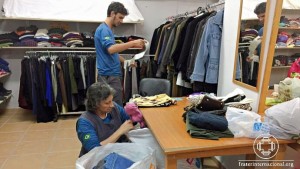 At the beginning of November, the institution Caritas Hellas, which Works in partnership with the missionaries of the Fraternidade – International Humanitarian Federation, had a new office inaugurated and part of the team of the Federation supported the move.

In this new place, the families of refugees are registered with the aim of receiving financial help. The missionaries were responsible for welcoming the families and referring to the corresponding department. About 18 families were attended.

The remnant of the group supported the distribution of feminine clothes and the organization of a great donation of clothes that arrived unexpectedly. Approximately, 400 bags of clothes were organized in the general storage. 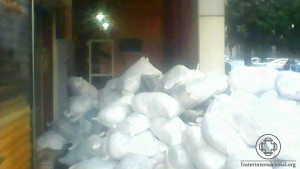 With the Sisters of Charity of Mother Teresa of Calcutta, the group helped the fixing of the meals to be served, the donation of hygiene products for those who arrive to take a shower, the harmonization of spaces of common use and the organization of food for donation. The team also supported the tasks in the Chapel.

The storage of clothes of the Association Lagonissi received the organization of the missionaries of the Fraternidade.

On the week-end, support was given to the Orthodox Church of Saint Theodore, tidying donations of clothes and preparing bottles of olive oil (which accompany the donated food).

Continuity was given to the work begun the week before, of selection of pieces for the Christmas Bazaar and of organization of the stock of clothes received and those already existing.