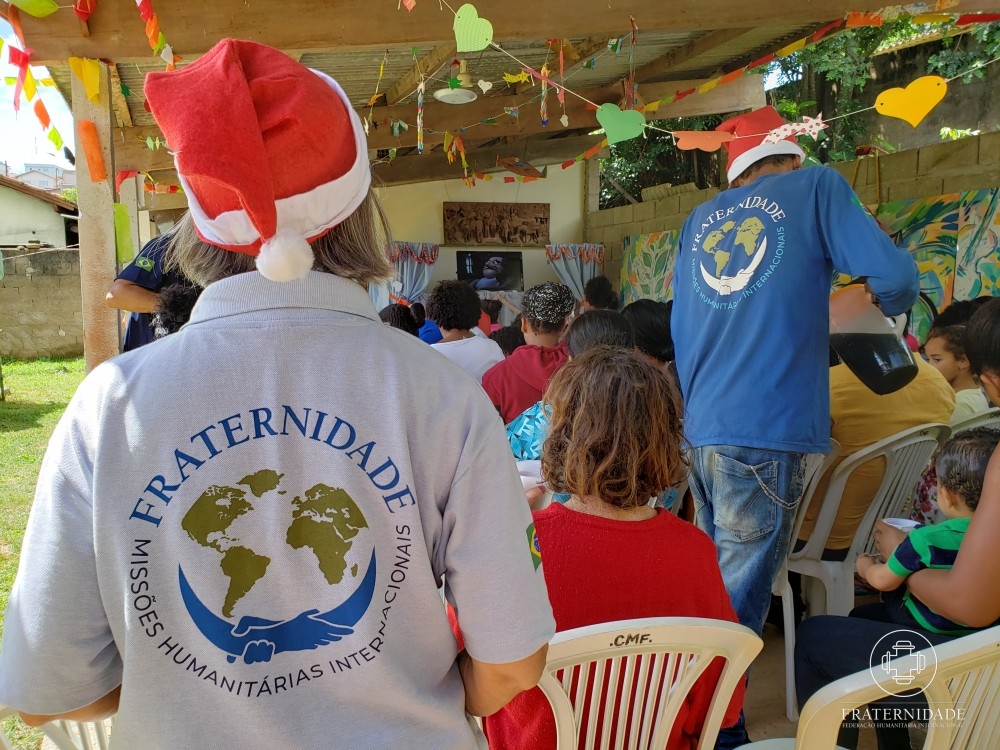 Last Sunday, the 15th, the Solidarity Christmas took place in Carmo da Cachoeira, an event carried out by the Missionaries of the Fraternidade – International Humanitarian Federation (FIHF).

Every year, hundreds of gifts are donated and made by the Missionaries and delivered to the children who live in the districts of the town. In this event of the Solidarity Christmas, which took place in the Shop of the Missionaries of Saint Joseph, about one hundred of them were present. A week before, the Missionaries went to the homes of the families that live near the place where the event was carried out, with the objective of registering the children according to age and gender, so that each one could receive a gift. Besides the delivery of the gifts, the Christmas festival was a lot of fun with many games to entertain and integrate the children who attended. The happiness of each one of them was noticeable, as Mariandja, the Missionary of the Fraternidade International (FIHF), tells:

“The feast was wonderful, early in the morning we watched a cartoon called “The True Story of Santa Claus”, an animation of the 70’s with an enchanting approach. While the children watched it, we served popcorn and soda, and right after the movie we began to distribute the gifts. Also all the children received a hula hoop directly from the hands of Santa Claus… They all loved the toy! We also played with giant soap bubbles, danced, had board games, among others. Both the children and the mothers themselves had a lot of fun”. The event also put in motion volunteers of the prayer group of the Light-Network in Sao Paulo, who, through an act of solidarity, made baby blankets to be donated to the pregnant mothers-to-be or to those who already had small children. The feast ended late in the afternoon, with the prize drawing of a bicycle. Mariandja concludes with highlighting the importance of the support of the Fraternidade International (FIHF) for the fulfillment of the event:

“As the Permanent Mission of Carmo da Cachoeira has the responsibility of the training of the Missionaries that go on missions world wide, all the great events we promote, such as the Solidarity Christmas, also serve as training for the permanent missionaries and also those who come to help us”.

Learn more about the Carmo da Cachoeira Mission by clicking here and get to know their activities!