Fraternidade intensifies its humanitarian help for Venezuelan refugees in Colombia

Fraternidade – International Humanitarian Missions (FIHM) is expanding its humanitarian aid work in Colombia, the South American country that receives most of the Venezuelan refugees and immigrants fleeing the political-economic crisis that has devastated Venezuela in the latter years. In June, Fraternidade began to be part of the Grupo Interagencia sobre Flujos Migratorios Mixtos (GIFMM Bogotá) (Interagency Group on Mixed Migratory Flows), and since then, it has participated in missions like the other institutions that are part of the GIFMM, for the purpose of gathering information on the needs of refugees and immigrants that reach Colombia. 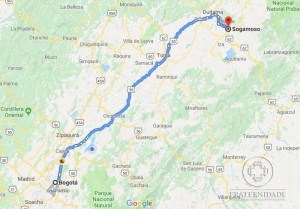 Priscila Vasques Helcias, the coordinator of the Colombian Humanitarian Mission of Fraternidade, explains that the first act of international cooperation was that of recognizing a stretch of one of the migratory routes most used by the Venezuelans. From July 17 to 19, a group formed by representatives of all the agencies traveled around 130 miles from the region of the border between Venezuela and Colombia to the city of Bogota, Colombian capital, to gain profiles of the walkers, as this fleeing population is also known; their needs; and the risks they take during the journey.

Participants in the survey were representatives of institutions such as the International Organization for Immigrations (IMO), the United Nations High Commissioner for Refugees (UNHCR), the Colombian Red Cross, the PLAN Foundation, the Norwegian Council for Refugees, the Bethany Organization, and WORLD VISION. “I hope that this mission provides us with the beginning of a fraternal union among the participating agencies, the local administrations, and the civilian society, so that together we may be able to provide what is lacking and avoid the identified risks,” says Hermann Cote Bieler, a volunteer of Fraternidade, who is part of the mission.

“The information gathered will be used to carry out an evaluation of the humanitarian response that is being given by the institutions and sectors of the civilian society to the refugees and immigrants,” says the coordinator of Fraternidade in Colombia. Previously, Fraternidade had already traveled part of this same stretch and identified the existence of only one shelter created for the walkers, which caused it to suggest  more immediate support for housing.

The result of that mission of the GIFMM Bogota will be presented shortly. Two reports are being written: one of them is destined for the regional administrations of the places visited, showing the current situation and making suggestions for caring for refugees and immigrants; the other will be presented to the National GIFMM, the humanitarian assistance international agencies, and the local and national institutions, for the purpose of promoting an operational response to the pressing needs identified during the mission. The reports will be submitted by July 31, and their presentation will be made in a regular session of the GIFMM Bogota on August 1.