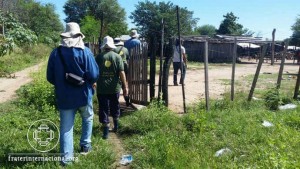 A part of the missionary group paid a first visit to another community of the Wichi ethnic group, in the outskirts of the city of Tartagal, in the province of Salta, Argentina. It is the community of El Mistol, the second village that is contacted within Confraternity Mission. In a talk with the Chief, it was defined the  presence of the whole group beginning next Tuesday, to begin tasks of support in the place.

The community lives on hunting, fishing, collection of wild fruits and grows some animals, such as goats, ducks and hens. Here the rains caused serious damage to the structure of the communitarian temple, bringing about the fall of its walls. 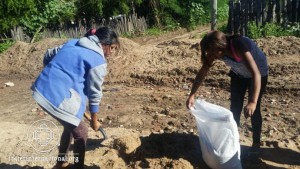 In the meantime, in the Wichi community of Fwolit, the building of the wall of protection against floods continued. There was a scarce and timid collaboration of the Indigenous people, due to the fact that it was a Sunday, a day of rest.

Many dogs with scab were identified, and there began a search for voluntary groups of animal protection. Several Indigenous families showed their sick dogs and said they did not know how to solve the situation. The city helps with a free annual vaccination against rabies. 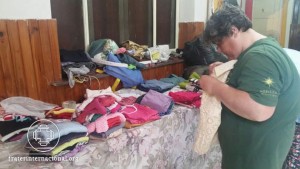 The missionaries of Fraternidade – International Humanitarian Federation, continued to receive donations and to carry out a classification of them. They also continued with the research of the needs of clothes and footwear in the community of Fwolit. The Chief asked for these donations to be given directly to each family in need.

Fighting scabs and parasites in dogs and cats 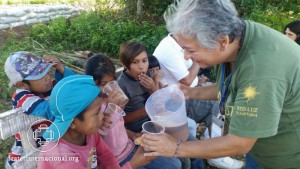 A breakfast was shared with the whole community, made with chocolate and 10 kg of bread donated by a Merchant from Tartagal. He promised to keep donating products of the bakery during the whole week.

After four days of work, the building of the wall of protection against floods was finished. It was raised with bags of sand around the temple of the community, following the request of the Chief, Modesto Rojas. 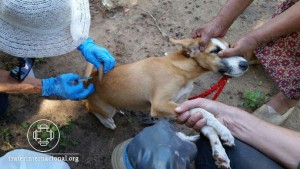 The group received donations of medicines and vaccines against parasites and scabs. The batch was sent by the group of animal protection Redmascotera (Network of Pets), which became touched by the photos sent by the missionaries. This made it possible for attention to be given, for the first time, to the Animal Kingdom of the community of Fwolit. Sixteen dogs and two cats were assisted with baths and vaccines. 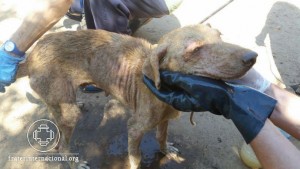 “We perceived that many sick animals approached us asking for help, and the situation was becoming unbearable, to the point of some children being contaminated by scabs. So we acted quickly, and thank God we managed these donations that allowed us to begin this action of emergency”, commented Rosi Freitas, a member of the group on mission.

While the animals were being vaccinated, several mothers approached the missionaries to ask for medicines against lice. In the afternoon, they obtained vinegar and combs to help cope with this problem.

Also diapers and milk donated by the groups of the Network-of-Light of Argentina were distributed.

All of you who feel like collaborating with the Confraternity Mission may obtain additional information here. 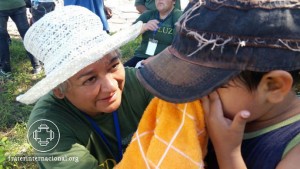 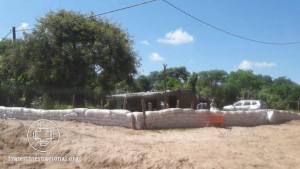 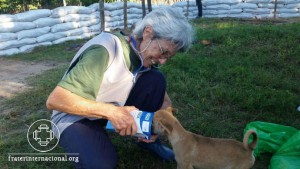