In the context of the pilgrimage that the Divine Messengers are making in the European continent during these months of June and July 2016, on July 19, in the city of Fátima, Portugal, during a reserved apparition of Mary, the Divine Mother, in the Nucleus-of-Light of Figueira of Sacred Heart, at the request of Our Lady, the Community-of-Light of Fleur-de-Lys was created, as a future manifestation of the counterpart of the Planetary Center of Lys on the surface of the Planet.

In the event, were present the visionaries of the Grace Mercy Order who accompany the Divine Messengers in this pilgrimage, Friar Elías del Sagrado Corazón and Mother Maria Shimani de Montserrat, and other representatives of the Order. 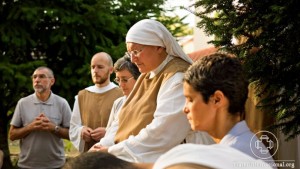 The existence of a Community-of-Light determines a step that we take, as representatives of humanity, upon materializing the bases, on the surface of the Earth, of spaces of co-existence where groups of souls aspire to experience new patterns of life that may be bridges for the New Humanity.

During the meeting, members of the nuclei and of the Network-of-Light offered to integrate the first group that will form the new community, thus responding to the proposal of the Divinity, of living the unconditional service to the Plan of God on Earth. 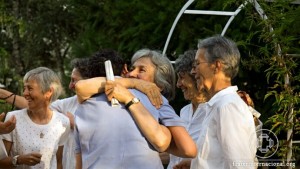 We participate in the experience of sowing these seeds of future life and of setting the foundations and lifting the walls of these communities, which aspire to experience a new life for the planet. It is an opportunity to materialize on the earthly matter a life consecrated and dedicated to the quest for the healing of humanity, of the kingdoms and rescuing the connection with the Divine Life.

In the words that the Divine Mother transmitted during the apparition of the last July 19, She expressed Her intention of spiritually ruling this new community, as the Kingdom of Lys, the name She gives to the spiritual space that lives in the region of Fátima, was founded by Her during the apparitions of 1917.