“Just as in Heavens the angelic melodies uplift and recreate the Plan of God in Its Infinite manifestation, the Divine Plan must be recreated on the surface of the planet through elevated music”. (Excerpt from a message of the Virgin Mary, transmitted on August 23, 2016 to the visionary Friar Elías del Sagrado Corazón, a monk of the Grace Mercy Order). 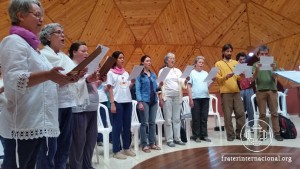 Choralists of the Communities-of-Light, Nuclei-of-Light and special guests participated in the Second Meeting of Choirs, which took place in the Community-of-Light of Figueira, from last January 7 to 13. The event gave continuity to the process of technical and spiritual study that began with the first Meeting, on November 12, 2017.

“We consider that a musician in the service of Light must gather 50 percent of technique and 50 percent of inspiration of the heart. It is not enough to have heart, because this does not allow to pour their inspirations onto a music score or to transmit them to other people. On the other hand, it is not enough to have a great technical mastery but not have a heart that lives this creation, which can be expressed when chanting or playing an instrument”, explained Friar Paulo, a monk of the Grace Mercy Order, and coordinator of the Choir of the Communities-of-Light. 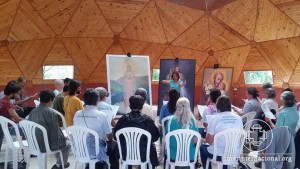 Besides deepening the training of the choralists, these meetings seek to unify a model of work among all choirs, as well as to awaken new talents, within a process of continuous renewal.

“This workshop sought to show that, regardless of age and technical level in which each choralist finds themselves, it is possible to improve, liberate their voice, overcome the shyness of playing before an audience. It is about connecting with the Source to gradually overcome the barriers of fear, of timidity”, said Rose Dália Carlos de Oliveira, one of the coordinators of the workshop.

Singer of lyric background, Rose Dália reported that they worked with sound a lot, learning to sing without tracks, without getting attached with rigidity to the scores, memorizing and hearing internally each part of the songs rehearsed. 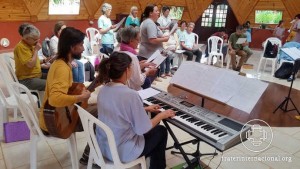 “Chant, uplifting music, helps to heal many aspects of the personality of those who dedicate themselves to this activity; many imbalances, many disharmonies, many non-concretized aspirations can be healed and transcended. For this reason, it is important that the choralists continue to work individually in their places of residence, that they dedicate time to express themselves musically, be it perfecting their voice, learning some instrument or developing the techniques of composition”, reflected El-Shaddaina, a conductor of the Choir of the Communities-of-Light and one of the coordinators of the meeting of training. 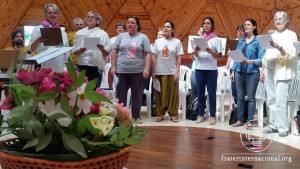 The program included notions of chant and choral chant, composition, musical theory, instrumental techniques, study of spiritual conferences about sound and music, as well as individual practice. Forty-five volunteers participated, including members of the Choir of the Community-of-Light of Figueira and of the choirs of the Nuclei-of-Light of Sao Paulo, Brasilia and Belo Horizonte, and guests. The material gathered in the workshop will be edited and distributed to all the coordinated choirs. The next meeting is expected to take place in the Community-of-Light of Fraternity, in Aurora, Uruguay, with the participation of the choralists of the Network-of-Light of Uruguay and of the Network-of-Light of Argentina.

Those interested in joining this musical work can get in touch via coral@fraterinternacional.org