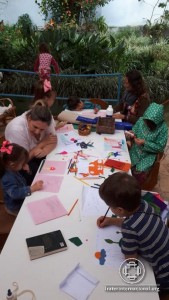 Children of the Tibetan Park Schools of the Community-of-Light of Figueira and House of Light on the Hill, affiliated with Fraternidade – International Humanitarian Federation (FIHF), have sent letters of encouragement to the firepersons who are working in the rescue of victims of the tragedy of Brumadinho, Minas Gerais, Brazil.

The children joined the current of good, which at the beginning of the month spontaneously started in the population – children and adults – of Brumadinho, and day by day also had the participation, already organized, of students from different cities of Brazil.

The letters were handed to a group of firefighters by three volunteers of Brumadinho Mission, a humanitarian service that Fraternidade has been conducting since last January 29.

“I Drew a dam breaking”, told five-year-old Gabriel. He then explained that he drew with the intention of transmitting “courage” to the firefighters.

His seven-year-old sister, Isabella, wrote a kind letter, in which she expressed her wish that the helpers “manage to reform the world again”. She also expressed “all of our gratitude”, on behalf of all of her companions.

From heart to heart 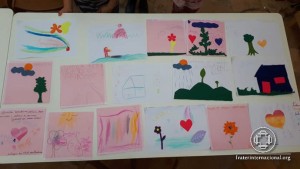 The children, ages between 3 and 12, preferably retorted to images like firefighters in children’s bodies, mountains, rain, rivers, trees, flowers, smiling suns, clouds, hearts, angels and little animals walking. One of the drawings – addressed to the pilot – according to its little author – showed a small helicopter with some firepersons. Another letter included the following sentence: “God is with you”, written among clouds, from which the light of a Golden star projected itself, illumining the work of the firepersons on the Earth.

Also one of the young collaborators of the rearguard wrote: “Dear firefighters, save the whole world, and save the animals, thank you for saving lives”, and asked for the message to the handed to the “boss of the firefighters”.

Another expression. Of encouragement that is already in Brumadinho says: “Have a lot of courage and save lives”. 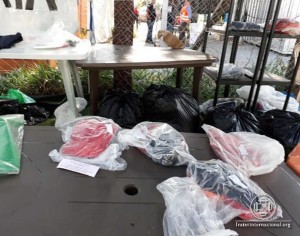 Packages of clean clothes with letters

In general, the letters at a post office installed in a sector of the base of operations, where a voluntary service of washing of the uniforms used by the firepersons. There, the helpers hand the dirty clothes and remove the packages of clean clothes, sometimes with a surprise detail: some letters of encouragement. “We did this task with lots of love to help those who are in the front line”, commented Vitao, an evangelic volunteer.

Until February 20, and after 27 days of grueling work, the helpers rescued about 400 people and a similar number of living animals, as well as bodies of 171 dead animals, whereas 139 human victims remain disappeared. That is what the Coordinator of Civil Defense of the state of Minas Gerais reports. Daily, about 110 firefighters alternate in the tasks. More than 1,000 firepersons have worked in the area, coming from the whole country, according to the chief of operation, the lieutenant colonel Anderson Passos, the commander of the 8th Battalion of the Firefighters of Uberaba, Minas Gerais.