Animal Echography course at the Francis of Assisi Park 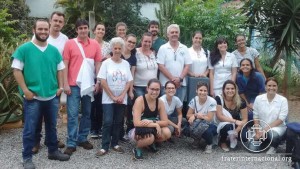 Starting this month, the Francis of Assisi Park is the place of practice of a free course on Abdominal Ecography in Small Animals, developed by the Department of Veterianarian Medicine of the Federal University of Lavras (UFLA), in the state of Minas Gerais, Brazil.

The proposal seeks to capacitate veterinarian doctors and students of Veterinarian Medicine of the last year of course in the realization of ultrasound  examinations on the abdomen of small animals. 16 professionals and University Students that come from several cities of the Brazilian states of Minas Gerais, Sao Paulo and Acre.

It is the first joint experience of professional capacitation between both institutions, according to what informed Patricia Arriel, a member of the Coordinating Board of the Francis of Assisi Park. Next January other projects will be defined to be developed during 2018 as university extension. 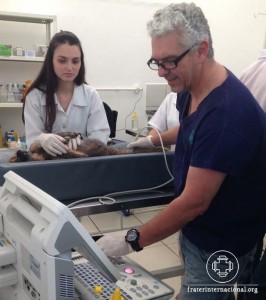 The course began in October, will last for six months and during the first two months developed its practical part in the university campus itself, explained Antonio Carlos Cunha Lacreta Jr., coordinator of the Department of Veterinarian Medicine and responsible for the capacitation event. He added that from now on the practices will take place exclusively at the Francis of Assisi Park, once a month.
In the first practice carried out at the Park, last December 9, Saturday, four ultrasound devices were used and 30 dogs were examined. Some anomalies were detected, such as neoplasia (cancer tumors), hepatomegaly (abnormal growth of the liver), splenomegaly (pathologic growth of the spleen), hyperadrenocorticism (tumors caused by the excessive production of hormones in the suprarenal glands) and uterine and ovarian granulomas (inflammatory tumors). 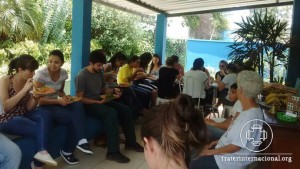 “The students became very content with this first experience, both for the great availability of animals and for the possibility of uniting academic practice to social action”, commented Professor Lacreta. On her turn, Patricia highlighted the great help that the activity represents for the Park, as it allows the diagnosis of diseases for their adequate posterior treatment.

The Francis of Assisi Park is a non-profit entity affiliated to the Fraternidade – International Humanitarian Federation. Created in 2010 in the city of Lavras to render service to the Kingdoms of Nature, it has a kennel that shelters over 400 ex-abandoned animals, which receive all necessary cares in a place built amidst a verdant wood.