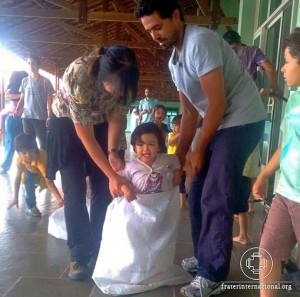 The Tibetan Park School of the Community of Figueira, a member of the Fraternidade – International Humanitarian Federation has carried out a meeting of fraternization, to celebrate the end of the school year of 2016. The event, which gathered students, teachers, parents and special guests, took place on Saturday, the 26th of November, at the educational institution, located in an area of the Sacred Heart Nucleus, one of the lodging areas of the Community-of-Light of Figueira, in the rural area of Carmo da Cachoeira, Minas Gerais, Brazil. Numerous activities, developed between 8 a.m. and 2 p.m., made possible the group integration among all those present.

Solar Group
The schedule began with a small drama representation, performed bya group of students. Then everyone participated in an Ecumenical Communion, followed by a series of group games that conferred the note of joy to the Saturday morning. Then, the Solar Group carried out a practice in rescue, of which children and adults participated. Also the annual exhibit of the school works and the distribution of gifts to the students. Lastly, everyone shared the group lunch. 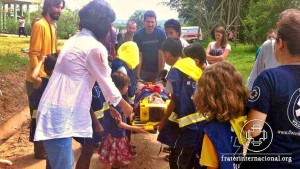 Helentiana de Paiva Gonçalves, one of the coordinators of the Solar Group, explained that the practice of rescue had the objective of developing the team spirit, through the application of simple procedures within everyone’s reach, with or without previous experience. The exercise consisted in simulating the rescue of an injured person in a place of difficult access by vehicle. For this a technique called “caterpillar” was used, which consists in forming a human chain of rescuers and in passing the portable stretcher from hand to hand until it reaches the ambulance. The experience lasted about one and a half hour. 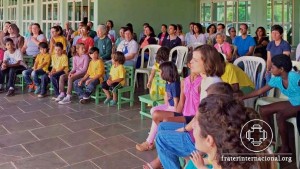 The Tibetan Park School functions in three places: in the Community-of-Light of Figueira; in the town of Carmo da Cachoeira, managed by the House of Light on the Hill; and in the Community-of-Light of the Nova Terra, in Teresópolis, State of Rio de Janeiro, all of them in Brazil. It develops the concept of a living education, which consists in “fostering the contact of the student with his inner being, with the Kingdoms of Nature and with the Cosmos, by means of the daily practice of spiritual values”, as highlighted by the dean of the host institution, sister Martzthá, a nun of the Grace Mercy Order.