The horses Vitorio and Aleluya: a story of faith and hope | Part 1

Representatives of the animal kingdom such as geese, chickens, sheep, cows, dogs, cats, birds and foxes are some of the animals that have already been assisted and taken care of in the Fraternity of Aurora Light-Community, located in the area of Paysandú, Uruguay. Among them stands out a magnificent herd of one of the noblest animals God created: there are five horses that graze freely in defined areas in the fields of the Light-Community. Vitorio and Aleluya, specimens belonging to this group, stand out in having a story of perseverance, love and fortitude. The mare Aleluya, and the male Vitorio were found by two pilgrims on the dirt road before the Marian Center, and at that moment what mostly caught their attention was that one was lying down flat and the other was standing, both of them looking at the statue of Our Lady of Graces, located at the entrance of the Aurora Marian Center. But the most shocking thing was their condition: besides being malnourished, the yearling had a large swelling on its hind leg, and the other, the mare, had a huge wound on her chest.

The Light-Community was immediately notified, and it managed to find out that they belonged to a neighbor, who was offered the necessary help so the animals could survive. 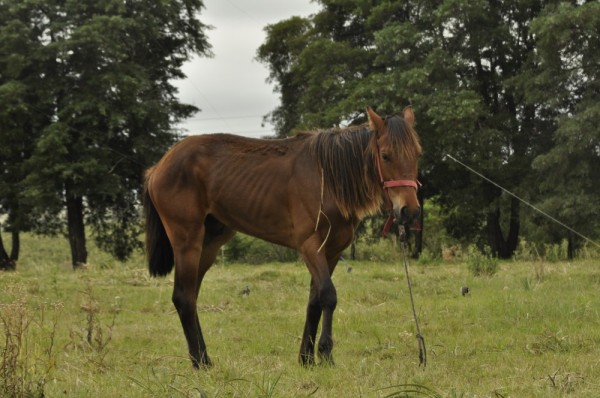 Vitorio was a foal that had been growing up healthy until, at the age of seven months, during castration, his hind leg was broken in two places: at the point of the femur, and between the femur and the knee. Because of this, it was no longer possible for him to do what he was meant to do, which was to work in the countryside, so he was abandoned.

At the same time that this accident was happening, Aleluya, a yearling mare of about the same age as Vitorio, was bitten by a yarará snake (viper) on her chest, which caused her to have the same experience as the other yearling: in the absence of any kind of treatment, the infection and the necrosis gradually advanced.

The horses were found a month after the incidents, and both of them already had a poor chance of surviving. The monk of the Grace Mercy Order responsible for the Animal Kingdom in the Light-Community, with great determination decided to try to save them: every day he would go to the neighboring field, each time with a different person, to be able to treat them. It was not easy. The whole process took more than four hours daily due to the animals’ fear and that they were untrained, which forced them to chase the horses with a different strategy each day to treat them with the antibiotics and anti-inflammatories.“I realized that in order to save them, I had to have the same spirit”, Friar Maximiliano tells us. “One needed to be greatly determined and have strong willpower to be able to help them.”

Vitorio was unable to step down on his hind foot and because of this difficulty, since his castration he could not lay down. To make matters worse, the surgery had not been treated and was infected with myiasis (maggot infestation). But although all of this weakened him moment by moment, his incredible strength of spirit kept him alive, despite having a great resistance to being treated. Day after day, some food was carried to them, such as cereal, corn, wheat and rice, so as to be able to approach them little by little and generate the trust that would allow them to be saved. Their malnutrition was alarming, but with love and patience, after 25 straight days, they managed to gain an improvement and this gave us hope.

“If you feel that you do not know how to love or that you cannot find it,

seek to take care of the Kingdoms of Nature, especially the Animal Kingdom,

that pours out their love to human beings,

even when they are so badly treated by them.”

The horses Vitorio and Aleluya: a story of faith and hope | part 2