The Fraternity shows film with the group working in Mariana, Minas Gerais

The Fraternity – International Humanitarian Federation will share the work of the group who went on mission to the city of Mariana, Minas Gerais, Brazil at the end of November, to aid the animals victims of the tragedy occurred in the region. 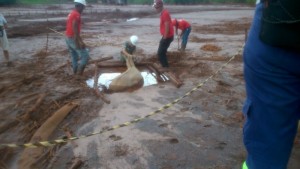 During the mission, fulfilled in three days, the team formed by Missionaries of Peace, the Solar Group and specialists in the attendance to animals from the House Light on the Hill, performed several rescues, treatments and referral of animals that were stuck in the mud.

To take to the people the moments that the group passed on mission in the place of the tragedy, a documentary was produced, about the entire work done. With duration of twenty-five minutes, the video will be shown next Wednesday, November 2, at 7:30 p.m., in the auditorium of the area F2, at the Community-of-Light of Figueira, with live transmission by the site of the Community of Figueira.

Watch the video of this campaign, by clicking here!