The team of  Missionaries of  Peace, Solar Group and specialists in animal care of the House Light on the Hill, all belonging to the Fraternity – International Humanitarian Federation, returned last Saturday, November 28, from the first mission to the city of Mariana, Minas Gerais, Brazil.there a tragedy had taken place, with the breaking of dams of a mining company, seriously affecting the region

It was three days of rescue work of animals stuck in the mud. In total, five animals were rescued. To pull out four big-sized animals, ten hours of continuous work were necessary. “We took up to one hour to pull out one leg of the animal”, explains Ricardo Baumgartner, coordinator of the group.the great quantity of mud made the work much harder: “It is a kind of mud with metals and iron ore. It dries on the surface, but it is soft underneath. It is a trap for people and animals”, he emphasizes. According to Ricardo, in certain spots there are great pockets of air, under the mud, increasing even more the danger. 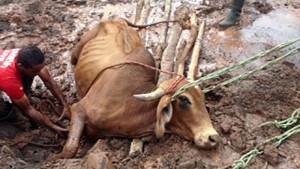 The group found stuck animals, stressed, with lack of water and food, and wounded.the rescued animals in the region are taken to a shed where they are treated. Right now there are four hundred animals in the place.the group helped the organization of this shed a lot, tidying great quantities of medicines, animal feed and cleaning material. “After organizing the shed, the next day we realized that the whole place was more harmonized, reflecting in the animals and the people who were calmer”, explains Ricardo.

The team already plans to return to the city within approximately fifteen days, where they intend to continue the help to the animals of the region.