“Better to light a candle than to curse darkness”
Japanese wisdom 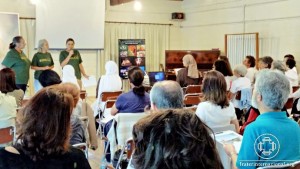 The Nucleus-of-Light of Figueira in Sao Paulo, Sacred House of Mary, Mother of Sao Paulo, received the event “Miracles revealed at a meeting” on the last 18th of November.

The meeting of instruction began with the presentation of the choir of the Nucleus, with songs and prayers especially dedicated to the Kingdoms of Nature. In the sequence, there was an audition of a talk imparted by the philosopher Sonia T. Felipe and the exhibit of the documentary “Race in Extinction”.

In November 2016, the Network-of-Light of the South of Brazil in Florianópolis promoted the 1st Meeting “Love for the Kingdoms of Nature”. As it referred to relevant information about the planetary situation, the spiritual philosopher Jose Trigueirinho Netto recommended the dissemination of the material of this meeting. Since then, members of the Network-of-Light have been on pilgrimage, showing the content in the Nuclei and in the Communities-of-Light. 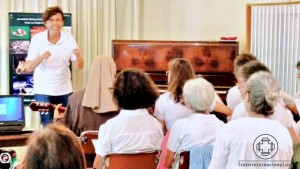 Sonia T. Felipe has a doctorate in Political Theory and in Moral Philosophy, and is a pioneer in the academic philosophical reflection about animal and environmental ethics. “People only see what they are prepared to see”, was the beginning of the lecture. Through a meticulous and detailed research, the philosopher exposed the current situation of the process of production of meat and animal derivatives, revealing the devastating impact of human feeding on the environment.

The numbers are appalling. For example: according to the author, in the production of a mere beef (100 grams) of bovine meat, 11 kilograms of animal feed and 34 liters of water are necessary (adding the water drunk by the animal, and the water used in the cultivation of the animal feed and in the slaughtering).

The documentary “Race in Extinction” reports the “Anthropocen”, the current period, in which human action has significantly affected the climate and the working of the ecosystems of the Earth. Particularly made explicit is the decisive influence of the oceans in the climate of the terrestrial globe, while it exposes how much the human being is downgrading the seas, in accelerated rhythm. 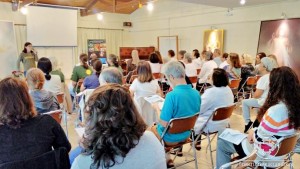 One environmentalist slogan shown in the film: “Change your diet and save the planet”, corroborates, together with the study of Sonia Felipe, the urgent need for a change in the human diet.

Amarista, a member of the Network-of-Light, commented: “It is very sad to have contact with this truth and realize the tragedy that takes place every day, in which we participate. After the fright, the question arises: how can we position ourselves to balance this lack of consciousness and of brotherhood?

The meeting had the presence of 60 people, including pilgrims, residents, monastics, collaborators and members of the Network-of-Light of several cities of the state of Sao Paulo. The meeting of awareness-raising ended with a vegan lunch.

The Nucleus-of-Light of Figueira in Sao Paulo develops an important task for the Plant and Animal Kingdoms: the preservation of native vegetation and the harmonious co-existence between wild and domestic animals with human beings.