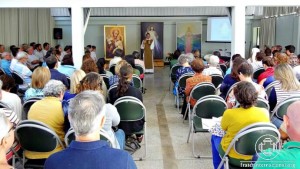 On last Saturday, April 1, took place the quarterly meeting of the Nucleus-of-Light of Figueira in Belo Horizonte – Sacred Sky. The Meeting, which had the theme “Selfless Life, a Leap into Infinity”, represented the opening of a new cycle of expansion to internal and external tasks of the Nucleus, having as axis the Consecration to Service. The event had the participation of 112 volunteers of the Nucleus, the Choir and the Monastery.

The meeting was opened with the presentation of the Choir and the audition of messages by Trigueirinho and Mother María Shimani de Montserrat, specially recorded for the gathering. Then, a quick retrospective was made of the past cycle and the updating about the projects in progress, such as the support to the dissemination of the Marian Center of Figueira, the consecration of collaborators who will integrate the 4th branch of the Grace Mercy Order, the beginning of the work of the guardians and the upcoming activities. 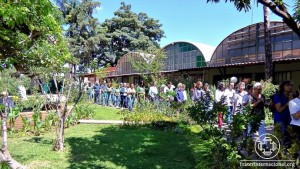 The transformation through which the Nucleus-of-Light passed in the last years was accompanied by old collaborators. It is the case of Gianni, who began to participate in the activities of the Nucleus-of-Light already in the 80’s: “When I am here, I feel entire, whole, as if all my bodies were united. It is as if I had found my soul again, here and in Figueira, and here to me is the sky”.

Lourdes Pazzini has also attended the Nucleus-of-Light for 30 years and talked about what she feels when she is in the Nucleus: “I have to enter here kneeling, in gratitude to life and to the work!”, she stated.

In the end of the meeting, the Ecumenical Communion was made, followed by a Procession in the internal areas of the Nucleus with the participation of all, following the image of Our Lady of the Rosary. A leaflet with the Prayer to the Sacred Sky and a little medal of Our Lady of the Graces was offered to all those present, as a symbol of renewal of vows of Service.

“It is so deep that I have no words. It is as if I were in another space, because since the beginning everything was done with a lot of love”, said Ercília Vasconcelos, a collaborator of the Nucleus-of-Light.