Nucleus-of-Light of Figueira had course for emergencies

Last Saturday, June 25, the Nucleus-of-Light of Figueira in São Paulo – the Sacred House of Mary, Mother of São Paulo, located in the city of Carapicuíba, São Paulo, Brazil,, received the course ‘Preparation for Emergency Situations’, organized by the Solar Group of the Fraternidade – International Humanitarian Federation. 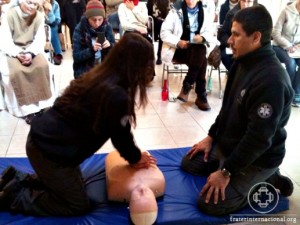 In the early morning about thirty people among collaborators of the Nucleus-of-Light, monks and nuns of the Monastery of the Divine Trinity of the Grace Mercy Order were already receiving the first instructions of the course, given by Helentiana Gonçalves and Cristiano Cavalcanti, who are both coordinators of the Solar Group.
In the class about ‘Basic Support of Life’, instructions were given on how to do a Cardio Pulmonary Resurrection (CPR) and how to recognize the vital signs of a victim of an accident. With the help of a special manikin for training, it was possible to learn in practice how to make a cardiac massage. 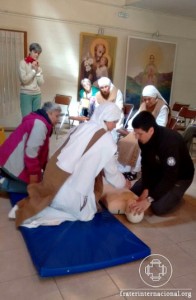 ‘It is always good to have an idea of what we can do and what we should not do, and thus help people who are working in an emergency situation. I have taken other courses, but I always have the sensation of not being ready. I think it is important to take the opportunities of participating in these courses’, said Cláudia Rimini, a collaborator of the Nucleus-of-Light of Figueira in São Paulo.

In the afternoon, the class was about what to do in case of natural disasters, such as earthquakes, floods and fires. Then, in the practical class, the use of fire extinguisher was explained.
‘There is a very joyful atmosphere and I consider this training very important, because we are doing the procedures in practice and not only in theory’, said Leila Aravechia, a collaborator of the Nucleus-of-Light. 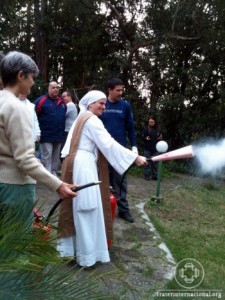 During the course, guidelines for the Nucleus-of-Light to organize itself for emergencies were also transmitted, including actions of research and periodic meetings to touch on the theme.
‘I perceive that this course is a resumption of a training that we did some time ago, but now in another point, in another consciousness. It is an impulse that is being given for us to really assume these times with more awareness’, said Shyowa Yamata Sakate, a therapist and collaborator of the Nucleus-of-Light.

The Solar Group will conduct the course ‘Preparation for Emergency Situations’ in others sections of the Fraternidade – International Humanitarian Federation.
‘We perceive a very positive feedback from the people who participated in the course and took a lot of advantage of the practical part. This meeting was very important for all of us, and we hope to give continuity to this work in the others Nuclei-of-Light’, said Helentiana. 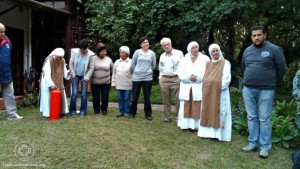