Missionary Practice of July included workshops of training of participants 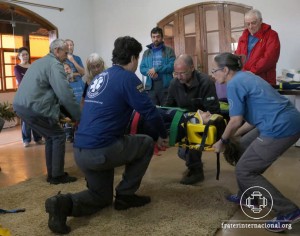 In July, the monthly Missionary Practice of Fraternidade – International Humanitarian Federation (FIHF), began to include activities of instruction, to complement the formation of the participants. Thus, the volunteers not only had the opportunity of practicing disinterested service to the neediest, but they also acquired basic notions about first-aids and about story-telling techniques.

The Missionary Practice took place in the week from July 16 to 22, 2018, and had the participation of 28 people, who came from numerous cities of Brazil as well as from Argentina, Chile, Ecuador and Paraguay.

The first-aids course was given by members of the Solar Group, in the headquarters of Fraternidade in Brazil. According to Helentiana Paiva, one of the instructors, the proposal awakened vivid interest in all those present, who made many questions and actively accompanied the whole training. 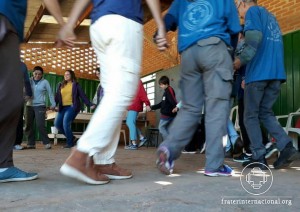 The story-telling workshop had the same degree of interest and took place in the Hut of Saint Joseph. Its objective was to give the volunteers tools for the moments of interaction with internees of homes for the elderly, hospitals, differentiated schools and other social assistance institutions. It had the participation of four teaches of educational institutions of Carmo da Cachoeira, state of Minas Gerais, as guest students.

The Hut of Saint Joseph, a place of distribution of donations managed by missionaries of Fraternidade, opened in a special way on Sunday, 22, as part of the Missionary Practice. The assisted families also had the opportunity of learning relaxation exercises.

Help to a sick person 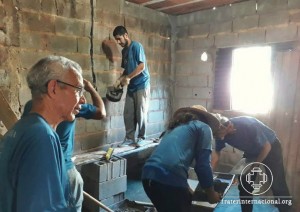 Renovation in the house of a sick person

In the middle of the week, the Missionary Practice went to the home of a needy family, where the homemaker was in a delicate health state victim of a lung fibrosis. There, according to the instructions given by the doctor, the volunteers helped renovate the bedroom of the patient, to offer him better conditions for rest.

“It was an unusual experience and, on this day, when we had a great number of collaborators, a truck that was buying used iron went past the door of the house. The circumstance was useful to remove, from the spaces, many residues accumulated throughout the years and to provide the humble family with resources for the purchase of medicines”, reported Luzia Serdano, the coordinator of the missionary event. 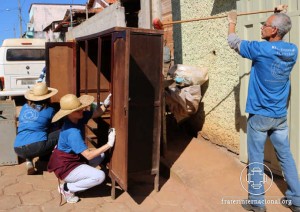 Alejandro Leirsch, from Buenos Aires, Argentina, who has participated in several Missionary Practices, states that each one of them offers new experiences and new learnings. “Group co-existence is a great school, where you learn to respect each one as they are, in their own time, temperament and peculiarities. Before the difficulties, we have to be firm, have good thoughts, concentrate on the task, without being led by pessimism”, he said.

Júlio Cézar de Campos, from Monte Azul Paulista, Sao Paulo, informed he was very happy, although he fell from the roof during a repair and was hospitalized, “because I was also able to live many other pleasant thins, and share, with a wonderful group, of great sensitivity and integrity, which put love in each act”. He added he was happy for having come with his son, “because I am sure the learnings received here will be useful for the whole life”.

Laerte Willmann, from the Network-of-Light of Valencia, Rio de Janeiro, considered that the Missionary Practice constitutes a rich and intense experience, “so much so that at the beginning, I could not adapt to the rhythm, but – as time passed – I could find moments of serenity to live each experience also internally”.