Irdin Editora will participate in Book Fair in Brasilia 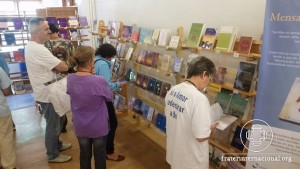 The Irdin Editora, affiliated to the Fraternidade – International Humanitarian Federation -, will be present in the 33rd Book Fair of Brasilia, an event that will take place from the 16th, Friday, until the 25th of June, Sunday.

The Irdin Editora will be located at the stand 37 of the fair, which will take place at the Pátio Brasil Shopping (Setor Comercial Sul, Quadra 07 – Bloco A – Asa Sul, Brasilia). The working hours will be from 10 a.m. to 10  p.m.

At the stand, of four square meters, the publishing house expose and sell, at cost prices, a wide variety of materials in Portuguese, Spanish and English. It will offer books, CD’s, MP3s, DVDs and mini-books by Trigueirinho, Mother María Shimani de  Montserrat, Friar Ameino (Clemente), Friar Luciano (Sivanum), Dorothy Maclean, Ana Regina Nogueira, Denise Gontijo Machado, among others, according to Evandro Oliveira Leite, manager of diffusion of the Irdin Editora. 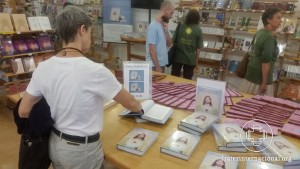 Some titles by Trigueirinho available in CD are: “Planeta Terra, um Ser em Redenção (Partes 1 a 7)” (“Planet Earth: a Being in Redemption (parts 1 thru 7)”, “A desestabilização das mentes” (the Desestabilization of the minds), “Humildade, liberdade e alegria” (Humility, freedom and joy), “As virtudes e os dons” (The virtues and the gifts), “Aos que buscam servir” (To those who seek to serve), “Os animais e o homem” (The animals and the human beings). In MP3 format will be available: “Falas de Cristo” (Speeches of Christ), “Presença de São José” (Presence of Saint Joseph), “Centros Planetários” (Planetary Centers), “Poderes da Oração” (Powers of Prayer) and “Forças Ocultas da Vida” (Occult Forces of Life).
Also available will be the books “Mensagens de Paz” (“Messages of Peace”), transmitted by the Virgin Mary to the visionary Friar Elías del Sagrado Corazón, of the Grace Mercy Order, and “Mensagens de Misericórdia” (Messages of Mercy), transmitted by Christ Jesus to the same visionary Friar. 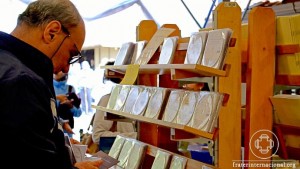 This will be the second participation of Irdin Editora in the Book Fair of Brasilia, and it has the support of the Network-of-Light group of that city, whose members will be collaborating during the whole event. The central theme of this edition of the Book Fair of Brasilia is “Citizenship and Inclusion”, with emphasis on young authors and readers. In the last edition, the event received the visit of about 300 thousand people, with a marked profile of youths (under 25), university students and of the masculine sex, according to research done by the organizers.

Irdin is a non-profit publishing house, kept by donations and voluntary collaborations. Its goal is to disseminate works of philosophic-spiritual nature that present keys for the recognition of immaterial laws and the broadening of consciousness, which offer support to those on the path of inner quest.