Thursday thru Wednesday, August 31 thru September 6 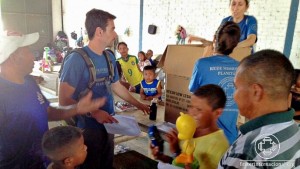 On Thursday, 31, an pregnant Indigenous woman began labor in the CRI – Center of Reference for the Immigrant – , was referred to hospital and had a baby.

Distribution of toys for the children, donated by the Social Service of Commerce (Sesc).

Food items donated by the Mormons. 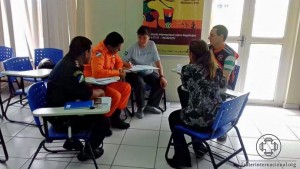 A meeting was held in the Secretary of Labor and Social Welfare of Roraima (Setrabes), with the participation of one missionary of the Fraternidade – International Humanitarian Federation -, one representative of the United Nations High Commissioner for Refugees (UNHCR) and one nutritionist. The agenda was the analysis of what food will be purchased for the CRI with the funds of 480,000 reals from the Federal Government of Brazil.

An Indigenous immigrant man was imprisoned for pummeling his wife. 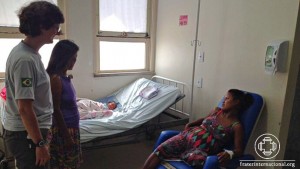 The Missionaries obtained a pair of crutches for an immigrant who broke his leg and received discharge from hospital. The donation was done by the PAPD (Program of Attention to and Prevention of Deficiencies), developed at the Nerf (State Nucleus of Physical Rehabilitation).

The arrival  of a delegation of the Fraternidade coming from the headquarters of the institution, in Carmo da Cachoeira, Minas Gerais, Brazil, to sign partnership agreements of the Roraima Mission.

The Missionaries visited both Indigenous immigrants who had babies and are at the  maternity. 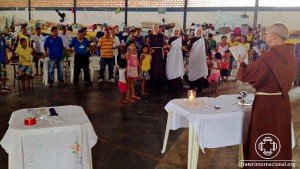 Friday, 1, began with a Mass in the shelter celebrated by a Franciscan priest.

Meeting with all the Indigenous people in the shelter about the constructions in the place. Carefulness was requested on the part of children and adults with the machines that are making the earthwork, and it was also requested that they do not throw trash (diapers and plastic bags) in the sewage system.

Two immigrants were referred to hospital emergency. One of them with a hole in their foot and the other because they were not feeling well.

Three Indigenous women with their children were taken to the Children’s Hospital. One of them had escaped from hospital with the child still sick and needing treatment.

“This behavior is frequent among the Indigenous people, specially the Venezuelans. They do not like to remain interned at hospitals. There still occur many cases of escape”, explained Claudia, a missionary of the Fraternidade. 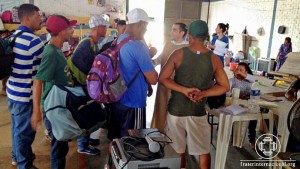 Every day new non-Indigenous Venezuelan immigrants arrive at the shelter, which has a number of people beyond its capacity.
“The arrival of new immigrants every day is constant. We are reaching the extreme limit, we may have reached the number of 600 people. At lunch time, the food calculated is not enough and we have to fix a complement quickly”, said Claudia. 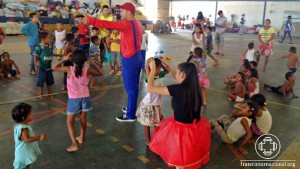 On Saturday, 2, the team of the Casa de los Niños (Children’s House), the name of the school that operates in the CRI, conducted playful activities and games with the children in the gymnasium.

A group of nuns of the monastery washed the head and removed lice in children and teenagers.

Ana Regina Nogueira, author of books published by Irdin Editora, was in the shelter and interviewed an Indigenous Chief and a representative of the non-Indigenous immigrants. 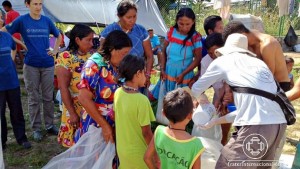 Distribution of food at the Bus Station

A doctor and a nurse of the Network-of-Light attended to cases of dermatology.

A baby with fever due to smallpox was referred to hospital.

Immigrants at the Bus Station

Wheat flour was distributed among the Indigenous and non-Indigenous Venezuelan immigrants who are camping in the region of the Bus Station of Boa Vista. 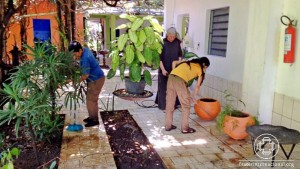 Group service at the new headquarters of the Nucleus-of-Light

On Sunday, 3, missionaries, members of the monastery, collaborators of the Network-of-Light and residents of the Nucleus-of-Light conducted a group service of cleaning in the place where the new Nucleus-of-Light of Figueira in Roraima will be located.

Another group of missionaries went to the house where the office of the Fraternidade will be situated in the city of Boa Vista. They made measurements and evaluated what will be necessary for the implementation of the office.

On Monday, 3, a non-Indigenous immigrant was referred to the General Hospital of Roraima. He had fallen and broken an arm.

Music Groups from Venezuela who made shows in Boa Vista, raised food items and clothes, which will be donated to the shelter. 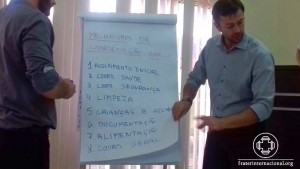 The UNHCR offered training for sheltering given by a specialist. Representatives of the Fraternidade, of Setrabes, of the city hall of Pacaraima, of the Fire Brigade who will work in Pacaraima, citizens of the city of Boa Vista, and of the immigrant shelter and of the rented houses which house refugees in Manaus participated in the training.

Several kinds of shelters utilized in the world and their organization were shown.

Then, a team of five people of the city hall of Manaus presented the work developed for the immigrants. 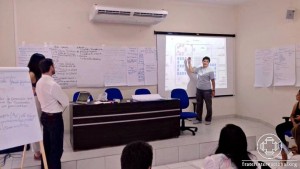 “The city hall of Manaus offers the service of shelter of immigrants in five houses rented downtown and also collaborates in the shelter of refugees together with the state of Amazonas. The city hall and the state government work in partnership in a very beautiful work of integration. They came here to bring this experience as a model of work for us who are here in Boa Vista”, said Claudia.

In the afternoon, group dynamics were conducted for the solution of different problems that concern sheltering.

On Tuesday morning, 5, the second day of training, the team of the city hall of Manaus continued the presentation of the works. The specialist on sheltering resumed the group dynamics in the afternoon. 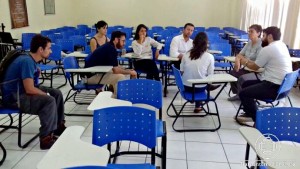 Meeting with the UNHCR

On Wednesday afternoon, 6, after the end of the training on sheltering, the Fraternidade had a meeting with all the representatives of the UNHCR to define several situations in the shelter of Boa Vista, which has an excess of refugees. The place, estimated for 200 people, has about 600 immigrants today.

“The whole Project made by the UNHCR for the shelter would not suppose the current number of refugees. We met to find solutions to the problem”, said Claudia. 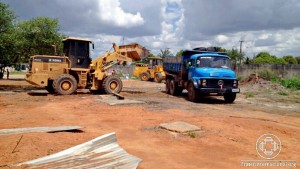 Constructions in the shelter 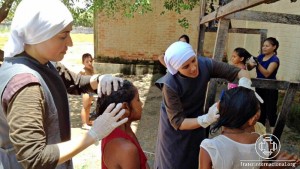 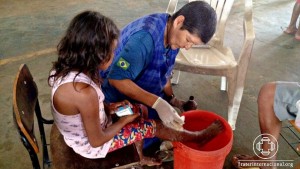 A volunteer treating a child 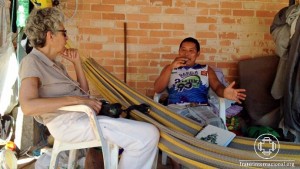 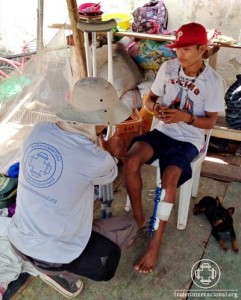 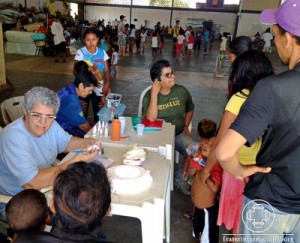 Health team of the Fraternidade