On Friday, 9, an Indigenous person who had pummeled his wife had to leave the CRI – Center of Reference for the Immigrant and is no longer allowed to approach the place.

TV team was in the shelter and made a report.

Renovation in the shelter 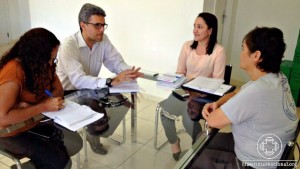 In the afternoon there was a meeting in Setrabes – Work and Social Welfare Secretary of Roraima, with the participation of a representative of the Secretary, of the Church of Jesus Christ of Latter-day Saints (aka as the Mormons Church) and a missionary of the Fraternidade – International Humanitarian Federation.

The subjects discussed were the renovations that will take place in the shelter and the collaboration of the Mormons. They will donate: personal hygiene kits, cleaning products, medicines, one hundred hammocks, freezer and refrigerator, perishable foods, and will also do the building of 10 bathrooms with showers and of a new sump.

With the arrival of funds from the federal government, the bathrooms already existing in the gymnasium will be renovated, the sump will be expanded, barracks and tents will be assembled and poles inside the shelter will be installed for the use of hammocks.

In the late afternoon, representatives of the Rotary Club and of the Projects Amigos em Ação (Friends in Action) gathered in the House of Saint Joseph to evaluate their possible collaboration for the Venezuelan immigrants.

Meeting at the University 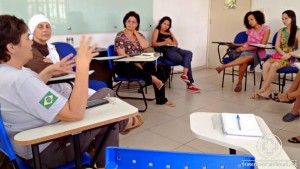 On Saturday, 11, the group of the Fraternidade participated in a meeting at the Federal University of Roraima (UFRR) with several teachers and students of the health sector, besides teachers of Anthropology and Sociology. The theme of the meeting was the situation of the Venezuelan immigrants, especially the ones in the shelter.

“We gave an explanation about the situation of the mission and of the shelter. Then, during the meeting, it was decided to begin at once specific points concerning violence against women, health guidelines, especially regarding sexually-transmissible diseases, and the situation of the children. It was a meeting in which the Federal University is opening for this beginning of partnership in the health area inside the shelter”, said Clara, a missionary of the Fraternidade. 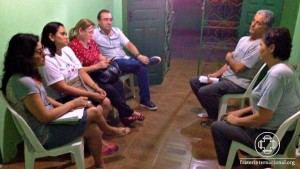 After the meeting, the group went to the shelter and found a situation of theft of the knives of the kitchen. A meeting was held in the gymnasium with all the members to talk about the little thefts that have been taking place there.

Sunday, 11, was a day of recovery for the missionaries and also of organization of the donations and cleaning of the missionary base. In the late afternoon, the group went to the Nucleus-of-Light of Figueira in Roraima to participate in the choir.