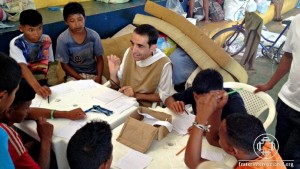 On Monday 19, members of the Grace Mercy Order began Portuguese classes for the Indigenous children that are in the CRI – Center of Reference for the Immigrant, in the city of Boa Vista.

In the evening, the missionaries were invited by a group of volunteer youths to participate in a mass in the church of Our Lady of the Migrant. 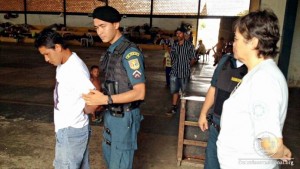 Engineers of the Secretary of construction of the state of Roraima were in the CRI to evaluate the place for the renovations that will take place.

Annex Secretary of  the Secretariat of State of Public security of Roraima (SESP-RR) was also in the shelter to know the facilities and evaluate future actions.

Indigenous refugee that must not approach his wife due to an aggression practiced previously, was in the shelter and was taken to the Police Station of the Women, for disobeying a judicial order.

Center of Migrations and Human Rights 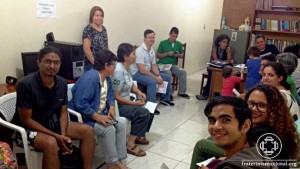 At night, a meeting was held in the House of the Social Pastoral, where the Center of Migrations and Human Rights (CMHR) operates. Were present representatives of the Fraternidade – International Humanitarian Federation – of the Network-of-Light of Roraima, the sister that coordinates the Center, a priest of the University Pastoral, a social assistant, a representative of the Diocese Caritas, a delegate of the Federal Police, a representative of the Intersubject Study Group about Borders (Geifron), Venezuelan volunteers of UNHCR (United Nations High Comissioner for the Refugees) and some Venezuelan families.

The agenda of the meeting was the work of the Venezuelan and Brazilian volunteers at the Federal Police, the exemption of taxes for the request for temporary residence in Brazil, and the position of the president of Venezuela who asked the United Nations (UN) not to recognize the request of Venezuelan in Brazil as refugees.

Volunteering
Volunteers of the Church of Our Lady of the Migrant participated in several tasks during the week, such as the selection and the organization of donations in the House of Saint Joseph, the cleaning and organizationof the kitchen of the shelter. 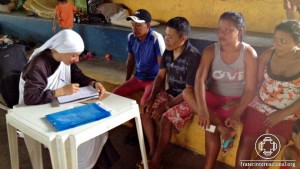 Wednesday, 21, members of the Special Secretary of Indigenous Health (SSIH) conducted several health attendances in the shelter in the morning.

On the following day, a nurse of the District of Special Indigenous Health (DSIH) referred two Indigenous persons who made the quick test for HIV and obtained a positive result, for the Service of Special Attendance (SEA) of a hospital of Boa Vista. The Indigenous persons had complementary tests taken and received medicine for three months of treatment.

A member of the Missionary Church High Refuge, which possesses houses of support for dependents on chemical substances, was in the shelter and offered collaboration for refugees who need recovery to drop some vice.

Donations
During the week, clothes, footwear and one ton of provision was handed to the Association of the Venezuelan in Brazil. The provisions comprised 500 kg of rice, 300 kg of manioc flour and 200 kg of milk  powder.

Other four institutions that attend to the Venezuelans received food and 11 food stamps were delivered for Venezuelan families that are not living in the CRI.

Personal hygiene material and food were received, donated by the Community of Saint Benedict.

Distribution of 74 kits of personal hygiene for the Venezuelan of the shelter.

Education
The missionaries participated on the 23 in a meeting at the Federal University of Roraima (UFRR) at the Amazonian Nucleus of Researches and International Relations (Anrir). The agenda was the need of a pedagogue to validate the teaching of the Portuguese language in the shelter, and the creation of workshops of arts for the youth. 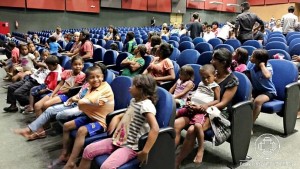 As part of the Welcome Project, of the UFRR, two Warao Indigenous children of the shelter were selected to  participate in the Movie Festival of the Amazonas, which took place on the 23rd at the theater of the University. Several Indigenous people were taken to watch the Festival and both children selected received a certificate for the participation in the Project.

On the 24th, representatives of UNHCR visited the shelter, covered all the areas of the  place, took photos, talked with refugees and missionaries and checked all the needs.

Arrival of new Venezuelan refugees in the shelter, 20 Indigenous and 10 non-Indigenous.

Sunday, 25, was a day of harmonization of the missionary base, and in the afternoon a meeting via the internet was held, of updating and integration with the missionaries of the Fraternidade who are in Carmo da Cachoeira, Brazil and in Greece. 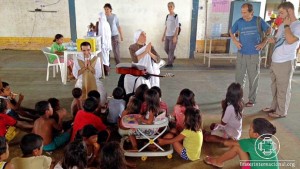 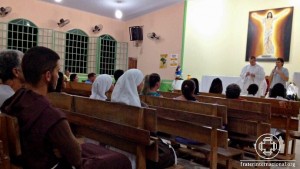 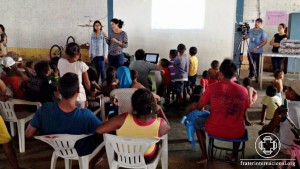