Thursday thru Wednesday, August 17 thru 23

Artisanship Exchange with the Macuxis Indians

On Thursday, 17, a team of the National Foundation of the Indigenous People (Funai) and representatives of the Artisanship Program of Roraima, of the State Secretary of Labor and Social Welfare (Setrabes) visited the CRI – Center of Reference for the Immigrant. They fostered the interchange between the Brazilian Indigenous People of the Macuxi ethnic group and the Venezuelan Indigenous people of the Warao ethnic group, both showing the artisanship they make. A workshop will be appointed with them for exchange of artisanship, which will be exhibited in the Artisanship Fair that takes place on the weekends in the Anauá Park, in the city of Boa Vista.

A team with two members of the “Médecins Sans Frontières” went to the shelter and donated personal hygiene items and cleaning articles to be distributed to the refugees.

The Setrabes also made the delivery of personal hygiene items and cleaning articles that had been acquired by the UNHCR.

In the afternoon, missionaries of the Fraternidade – International Humanitarian Federation – had a meeting with the UNHCR, to organize actions in the CRI.

Donation of food was received from the Mesa Brasil (Brazil Table) Program of the Sesc (Social Service of Commerce). 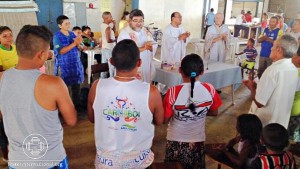 On Friday, 18, a team of the Médecins Sans Frontières donated medicines.

Missionaries of the Fraternidade transferred donations of clothes and cookies to the shelter of the International Church of the Foursquare Gospel.

A Mexican missionary doctor, accompanied by two priests of the Church, attended three patients in the morning.

Accompaniment of health of Warao baby, with its mother, who was hospitalized at the Child’s Hospital.

A new donation of food from the Mesa Brasil (Brazil Table) Program of the Sesc.

In the afternoon, in the House of Saint Joseph, the assembly of the personal hygiene kits was made, with materials that had been donated by the Médecins Sans Frontières and by the UNHCR. 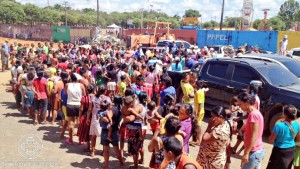 A volunteer group distributes snacks in the shelter

On Saturday, 18, the distribution of a great amount of personal hygiene and cleaning kits was made in the shelter.

Donation of clothes to the shelter of the International Church of the Foursquare Gospel, which houses about 35 Venezuelans.

The Missionaries of the Fraternidade picked a mother with her baby who had received discharge at the Child’s Hospital.

A volunteer of the Project “Musical Remedy”, which travels the country bringing music for children who are at hospitals and in places in need, was in the shelter and made a presentation.

The group distributed snacks (juice and sandwich) to all refugees in the shelter.

⟢
Sunday, 20, the missionaries of the Fraternidade stayed in the House of Saint Joseph, making selection of clothes.

The week began in the CRI with the distribution, early in the morning, of kits with footwear for children and clothes for the men.

Received donation of food given by the Mormons.

Delivery of donation of clothes to the Association of Venezuelans in Brazil.

A team with tem people of the Ministry of Health, from Brasilia, went to the shelter to check the health situation of the refugees in the place, in the hospitals and in Pacaraima.

On Tuesday, 22, the national president of the Church of Jesus Christ of the Latter-Day Saints (aka Mormon Church), who came from Brasilia and representatives of the UNHCR visited the shelter to check the current needs.

Warao refugee, after surgery in his leg at hospital in Boa Vista, escaped to the shelter. As soon as the missionaries perceived his presence, he was taken back to hospital, as his leg began to show signs of infection.

Another Indigenous person, coming from the city of Pacaraima, arrived at the CRI in a poor state of health and was also hospitalized at the General Hospital of Roraima.

Distribution of clothes to Indigenous and non-Indigenous men. 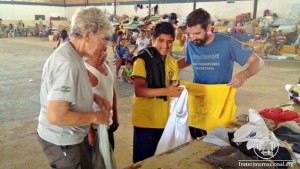 On Wednesday, 23, there was the distribution of hygiene kits and clothes to non-Indigenous refugees.

Another donation of food from the Mesa Brasil (Brazil Table) Program of the Sesc was received.

A clothes shop from the city of Boa Vista made donations to the shelter.

The special Secretary of Indigenous Health (Sesai) of the Yanomami Special Indigenous Sanitary District (Dsei) went to the CRI and made quick tests for diseases.

A representative of the International Organization for Migrations (IOM) visited the shelter to plan future collaborations.

A member of the Post-Graduate Program in Military Sciences of Rio de Janeiro visited the shelter to plan possible supports.

An anthropologist from the Roraima Federal University (UFRR) went to the shelter, accompanied by two representatives of the Missionary Indigenous Council (Cimi) of Roraima, to get to know the place. 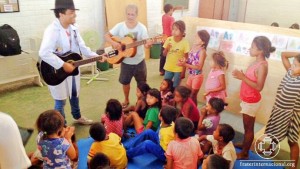 Musician with the children 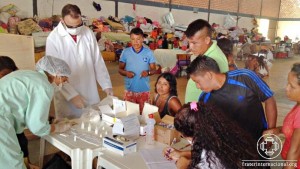 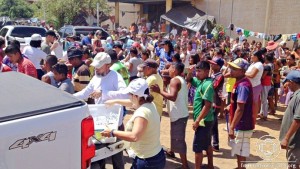 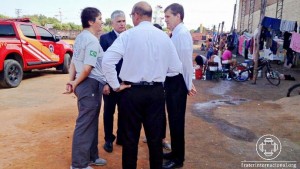 Meeting with the UNHCR and Mormons

Artisanship Exchange with the Macuxi Indians 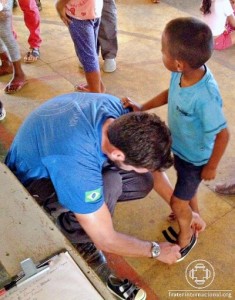 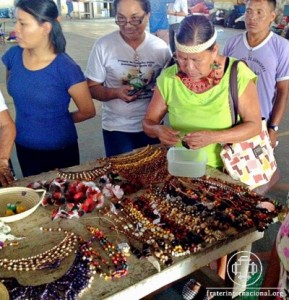