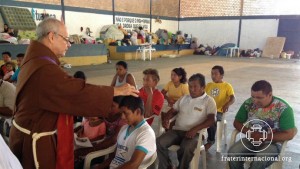 A mass, celebrated by a Franciscan monk, opened the Wednesday in the Center of Reference to the Immigrant (CRI). Later, the place was visited by a worker with UNHCR (United Nations High Commissioner for Refugees) and a representative of ABIN (Brazilian Agency of Intelligence). UNHCR makes an investigation about the situation of the Venezuelan immigrants in Roraima. 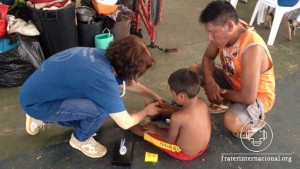 A doctor from the Network-of-Light group of Niterói, Rio de Janeiro, began health assistance in the CRI. She also referred two cases to a nearby polyclinic.

Expressions of solidarity
On Thursday, 16, two Indigenous people from Brasília, who integrate the CNPI (National Council of Indigenous Policy) visited the CRI to learn about the situation of the Warao. They bought artisanship and filmed testimonies so that they might be known in the Brazilian capital. 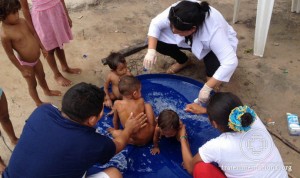 A team from SESAI (Special Secretary of Indigenou Health), an organ of the Health Ministry of Brazil, made works of removal of parasites, applications of vaccines and attended cases of children with chickenpox. Then they announced that it will continue these actions on a weekly basis, during three weeks. A doctor from the Network-of-Light accompanied a case of an indigenous person with urinary infection.

The Missionaries had a meeting with the Warao to evaluate their participation in the Indigenous Assembly of Roraima, which took place last week-end. They also gathered with non-Indigenous immigrants to organize rules of behavior concerning cleanliness, organization of the kitchen and other everyday details.

On Friday, 17, a pastor from the Seventh-Day Adventist Church and a volunteer from the private entity Redes arrived in the shelter. Both received information about the necessities and offered their help. 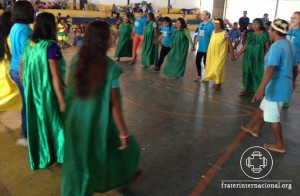 Biomedicine students from the Claretian University Center brought, on Saturday, 18, donations of clothes, provisions and toys obtained during a solidarity campaign. They also offered a talk about Sexually-Transmissible Diseases (STD) and made recreational activities with the children. Warao women retributed with an offering of Indigenous dances.

In the afternoon, youths from an adventist church organized donations of clothes and provisions and shared them with the refugees. 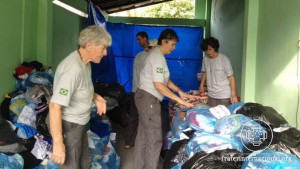 On Sunday, the missionaries dedicated the day to organizes donations of clothes and food in the House of Saint Joseph of Boa Vista. 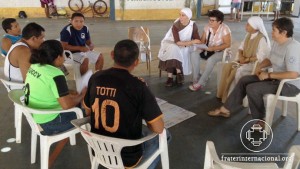 “On Monday morning, the refugees welcomed us with a pleasant surprise: by their own initiative, they made a deep cleaning of the kitchen and of the storeroom”, highlighted the missionary Clara. She explained that this action arose after several indigenous people were found drunk on Saturday. Then, shifts were organized during the week-end to avoid both the entrance of drinks and of drunken refugees. As a repair for the bad behavior of Saturday, the assisted people decided to organize the volunteer group service of cleaning.

On Tuesday, 21, the missionaries gave a lecture in the Federal Institute of Roraima about the situation of the Venezuelan refugees in the CRI. This was at the invitation of a teacher of the Literature graduation course, who asked her students to make a work in the shelter. 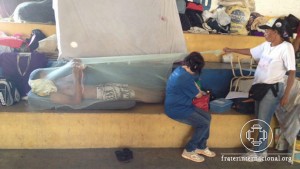 The volunteer doctor from the Network-of-Light continued her health attendance, referrals and follow-up in the polyclinic near the CRI.