Greece Mission – Special Attention at the Storage in Lagonissi 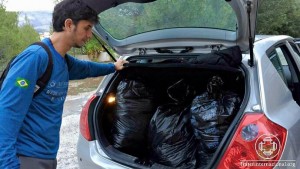 Since 2016, Fraternidade – International Humanitarian Federation, has maintained a permanent missionary basis in Greece, for the attendance of refugees, who come especially from the Middle East and from Africa.

This week the group went to the institution Caritas Hellas, helping the weekly distribution of female clothes and giving support in the refectory. The stock and the general storage, where the donations of clothes are stored, were also organized by the missionaries. 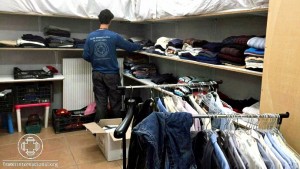 The group gave support to the Sisters of Charity of Mother Teresa of Calcutta in the fixing of meals and in the harmonization of the refectory and common areas. Several bags of rice were made for the credentialed families, and distributed articles of personal hygiene. In the middle of the week, they went to a shelter of refugee families, coordinated by the Sisters of Charity, to organize the storages of the building and the ordering of a classroom, where the refugees learn the local language 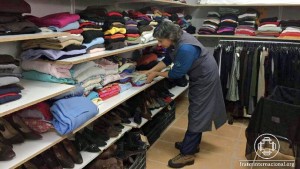 Due to the recent storms, the clothes storage of the Lagonissi Association needed greater care in this period, and the team of Fraternidade went there in one of the afternoons of the week. Several bags of donation of clothes to be handed by the Sisters of Charity in the prisons visited by them.

In the Orthodox Church of Saint Theodore, the missionaries organized the donations of clothes in the storage and also bottled olive oil for donation to the families.