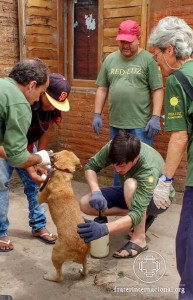 The greatest service to the Animal Kingdom rendered so far by the Chaco Mission took place last December, during the Eighth Meeting of Service to the Indigenous Communities. In two days, the participants helped more than 450 dogs, many of them with scab, ticks and different situations of malnutrition. The volunteers disinfected wounds and gave anti-parasitic treatment and food.

“On this occasion, we were strongly impacted by the number of hungry and sick dogs that we found, which led us to ask for help from Above. Before each task we offered ourselves to the Universe and asked for the intercession and help of Saint Joseph”, described Guillermo, a member of the Network-of-Light group of Chaco and focuser of the service to the Animal Kingdom. The task was rather difficult because, besides attending a great number of animals in precarious conditions, the activity lasted for several hours in a very hot climate.

Leo, a volunteer from Posadas, Argentina, who participated in the group of animal assistance, highlighted the feeling of gratitude of the Indigenous peoples reflected in the initiative of one of them, who, on his bike, never got tired of approaching the group, offering water to drink, while he crossed the hot streets of Cacique Pelayo, helping the dogs. 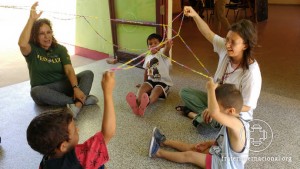 The Mission was developed from December 8 to 10, in two Indigenous communities of the Qom ethnic group, in the province of Chaco, Argentina. 50 volunteers participated, many of them for the first time. They were members of the Network-of-Light of Argentina, of the Community-of-Light of Brotherhood, of the Grace Mercy Order and collaborators from various cities of Chaco and other Argentinian cities, such as Corrientes, Paso de los Libres, Cordoba, Villa Giardino, Posadas, Formosa, Tucuman, San Luis, Bahia Blanca, Buenos Aires, General Roca and Neuquen. Volunteers from Brazil also participated. 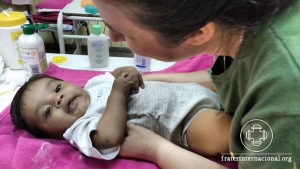 Besides working with the Animal Kingdom, Chaco Mission helped the children and women of both communities assisted: one in the district of Cacique Pelayo, in the locality of Fontana, and the other in Margarita Belen. In both places were organized workshops of oral health and hygiene, hair wash and haircut, lice removal and baths to babies. There was also artistic painting on the faces of children, painting of mandalas, drawing and painting, origami, music, recreational activities and artisanship. 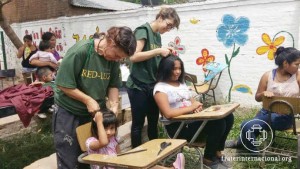 Donations of foods, clothes, footwear, sheets, towels, diapers for babies, toys, toothbrushes, among other products, were also distributed. In the district of Cacique Pelayo, one donation was made for the Health Center. Also many families in extreme poverty were visited, who were attended with products of basic necessity. At the end of each day, there was a presentation of puppets, which was noisily celebrated by the children’s audience from both Qom communities.

To Sofia, a volunteer that comes from Cordoba to participate for the first time on the Mission, the most significant and enriching aspect was to feel part of a solidary group and see how little actions conducted by everyone, in a harmoniously way, can have a positive impact. 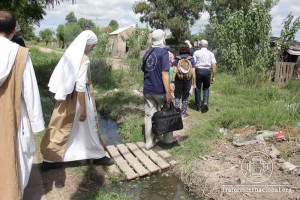 The Chaco Mission was held for the first time between January 26 and February 8, 2016, complying with a request of the Virgin Mary transmitted in her message of December 20, 2015, by means of Friar Elías del Sagrado Corazón, a visionary monk of Grace Mercy Order. In May 2016, it became a Permanent Mission and since then it has held regular meetings. The ninth meeting will take place next February, from Saturday 10, to Monday 12.

Chaco Mission is part of the Campaign “Mission with Indigenous Peoples” of Fraternidade – International Humanitarian Federation.

Those interested in being a part of this school of love to one’s fellow being may come into contact with the Network-of-Light of Argentina – Northern Region via redluzargentina.norte@fraterinternacional.org