Egypt Mission-Services of infirmary in a home for the elderly 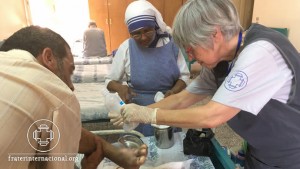 For the second day in a row, the missionaries of Fraternidade – International Humanitarian Federation (FFHI), rendered services in a home for the elderly in the city of Cairo, during the Egypt Mission, which is taking place in this country of Northern Africa now and will last until June 24.

One of the members of the missionary group, with background in Nursery, helped a man who had just received shelter. He had been retrieved from the streets and had several wounds in the body. In the afternoon, the therapeutic services extended to other internees of the masculine ward. “It was a very special day, because we had the opportunity of coming into contact with the heart-breaking reality of a brother who had just been rescued from a situation of being homeless”, commented Manuela Braga, the nurse on mission.

Other humanitarian missionaries helped the tasks in the kitchen, fixing food, collaborating in its distribution and harmonizing cutlery and utensils. 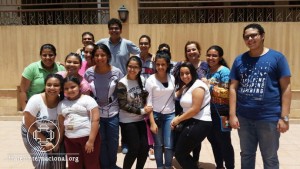 The male group dedicated itself to conducting maintenance tasks in the precincts, concentrating in a special way in the cleaning of the walls of the masculine refectory. They also supported the task with the cutting of cloths for the elaboration of towels and linen for the tables of the refectories, dormitories and toilets.

On this Saturday, many Egyptian volunteers joined the tasks of harmonization of the house. This practice is usual during the weekends, and is featured by youths and adults who arrive from several cities near the Egyptian capital, as the Sisters of Charity, responsible for the place, explained.

Those who wish to support this endeavor of love and peace for Africa and the Middle East can obtain more information by clicking here.